The first month of 2022 will offer us mostly clear skies, giving us the opportunity to observe a spectacular nebula, a true celestial shower and four open clusters, and presents us with a great challenge: observing the asteroid 7 Iris. In addition, the Moon going through its different phases is always a reason to look at the sky.

There are many areas where regions of gaseous hydrogen coexist, either in molecular (H2), atomic H (I) or ionized (HII) form. In 1785, the astronomer William Herschel observed one of these peculiar objects in the constellation of Monoceros (Unicorn), which he simply called HV.27. Now called NGC 2264, its appearance is reminiscent of a Christmas tree with its bright and dark contrasts, so it is known to many as the Christmas Tree Cluster.

Although the Monoceros constellation is not one of the most spectacular constellations because it lacks bright objects, it contains the fascinating object NGC 2264 and its neighbor, the Rosetta Nebula.  NGC 2264 is about 8 light-years across, is located 2,300 light-years from Earth (720 parsecs), and is actually a very complex region, containing the NGC 2264 Nebula, the NGC 2264 open cluster, the Cone Nebula, the Snowflake cluster, and the Fox Foot Nebula.

NGC 2264 is made up of very young stars, between 1 and 100 million years old, and very bright, among which 15 Mon, a 4.6 magnitude star (125,000 times brighter than our Sun), stands out, although it is actually a binary system separated between 6 and 46 astronomical units, with masses between 12 and 30 times that of the Sun.

NGC 2264 will already be well placed for observation, visible most of the night with binoculars or a small telescope, towards the eastern part of the celestial sphere. 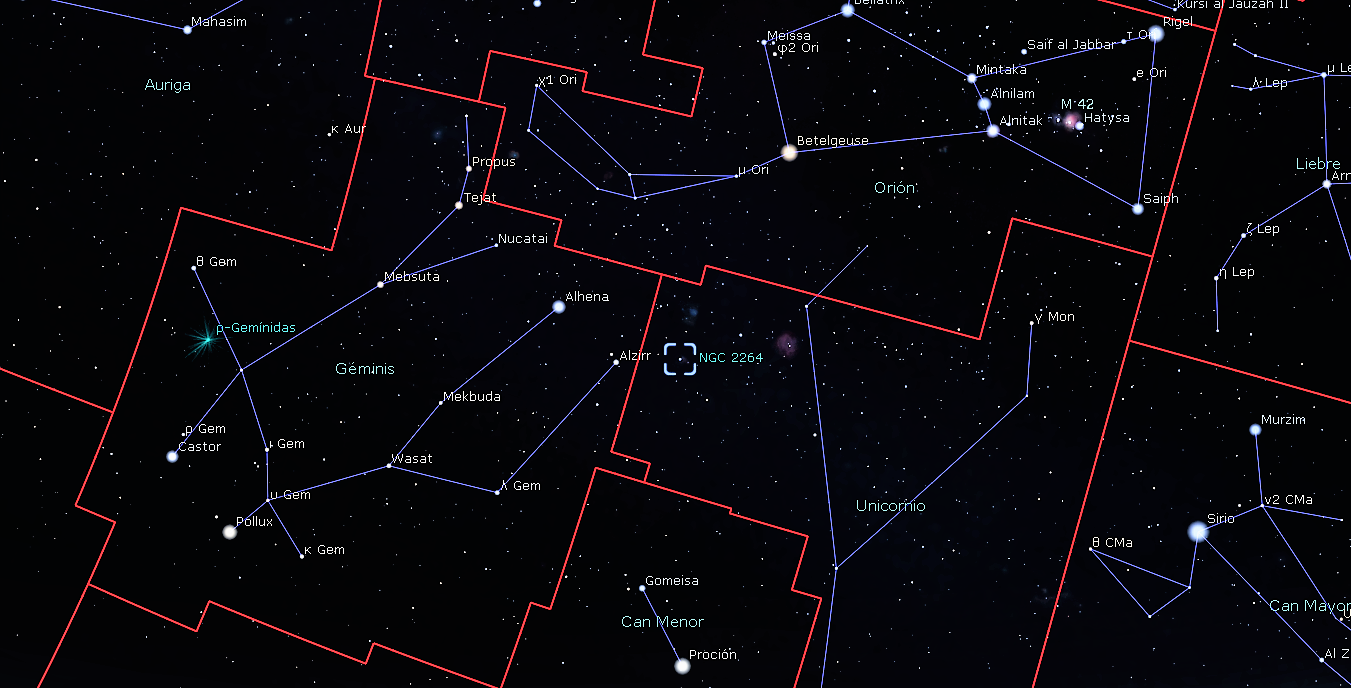 A real shower, the Quadrantids

The Quadrantid meteor shower has its activity between December 12 and January 12, with its maximum on January 3. The maximum observable rate will be 120 meteors per hour. The radiant is located in the direction of the constellation Boyero, with coordinates AR=15h20m, DEC=48º00'. The minor body 2003 EH1 and comet C / 1490 Y1 are responsible for this shower. The shower is expected to reach its maximum activity on January 3, around 16:00 central Mexico time, so the best displays could be seen before dawn on January 3 and after the radiant rises on January 4, towards the northeastern part of the celestial sphere. 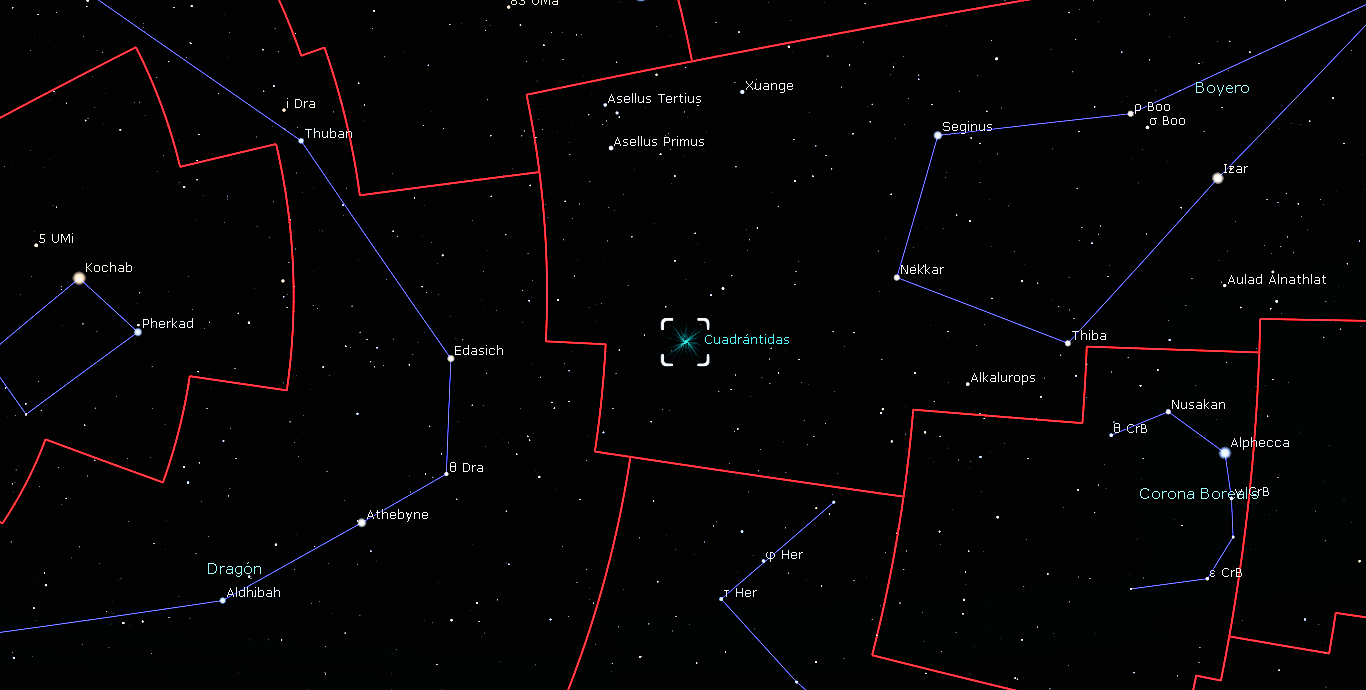 This open cluster, M41, was probably observed by Aristotle in 325 B.C.; however, credit for its discovery is given to Hodierna in about 1654. It was also observed by John Flamsteed in 1702, by Le Gentil in 1749, and by Charles Messier in 1765, who included it in his catalog.

Locating M41 is relatively simple, since it is located in the constellation Can Major, which contains the brightest star in the firmament: Sirius. Precisely at about 4° from this star and very close to 12 Cma, we can locate M41.  This cluster is located at a distance between 1,600 and 2,300 light-years from Earth, has an estimated age between 190 and 240 million years, and consists of a hundred stars distributed in a volume of about 26 light-years in diameter, so it is not difficult to think of several multiple systems of red or orange giant stars.  M41 will already be well placed for observation most of the night, with binoculars or a small telescope, towards the southeastern part of the celestial sphere. 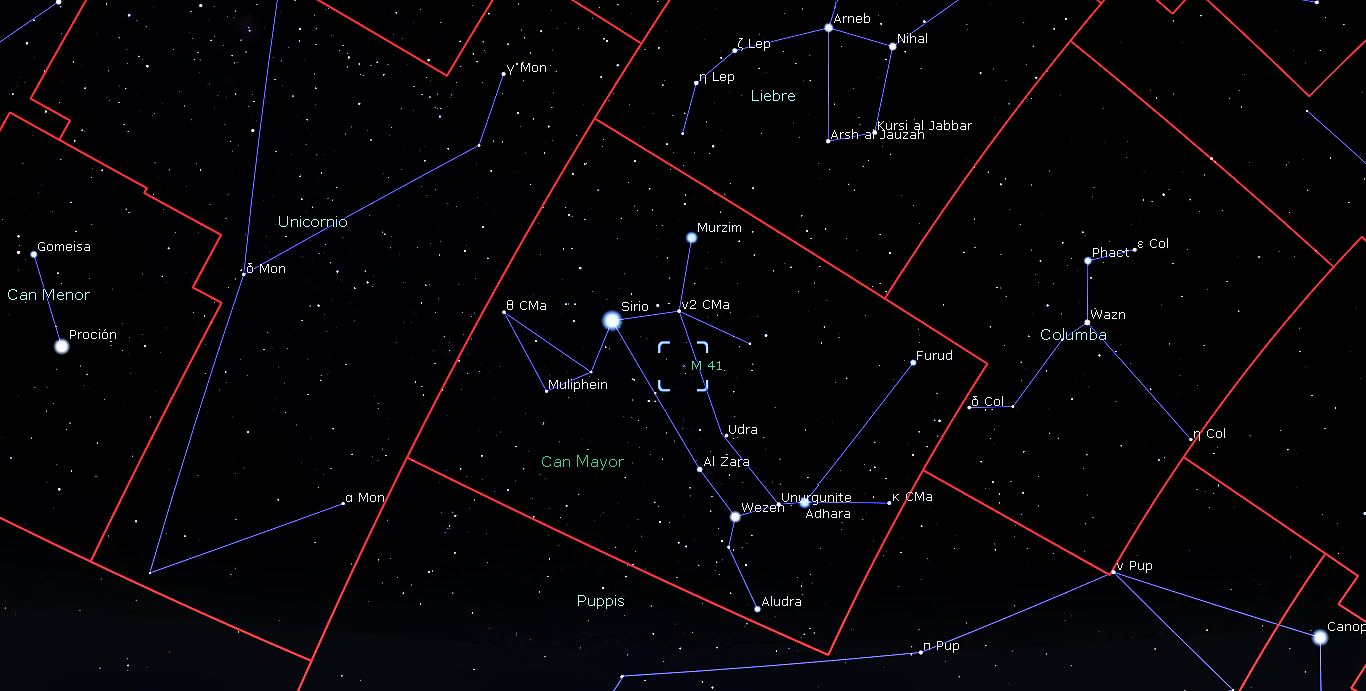 An old acquaintance, the Beehive Cluster

Because of its great brightness, it is presumed to have been observed since ancient times by Greeks and Romans, who called it The Manger (Preseape).  Erastótenes associated it with the asses ridden by the gods Dionysus and Silenus in the battle against the Titans. Aratos, around 260 B.C., mentions it as "a small mist". Hipparchus, in 130 B.C., included it in his catalog of stars and called it "the little cloud" or "cloudy star". Ptolemy mentions it as one of the seven "nebulae" in his Almagest. According to Burnham, it appeared in Johann Bayer's letter (1600 A.D.) as "nubilum" ("cloud"). Galileo defined it as "nebula" and reported: "the nebula called Praesepe is not a single star, but a mass of more than 40 small stars". It was probably seen and resolved in 1611 by Peiresc, the discoverer of the Orion Nebula, and resolved as a cluster by Simon Marius, in 1612. Charles Messier added it to his catalog as M44 in 1769. M44 is currently considered to have about 200 stars and is located 577 light-years from Earth, with an estimated age of 400 million years.

As a curious fact, the age and direction of its motion almost coincide with those of the Hyades, another famous cluster, so it could be thought that these two clusters, today separated by hundreds of light-years, could have a common origin in some large diffuse gaseous nebula that existed 400 million years ago. M44 will already be well placed for observation most of the night, toward the eastern part of the celestial sphere. 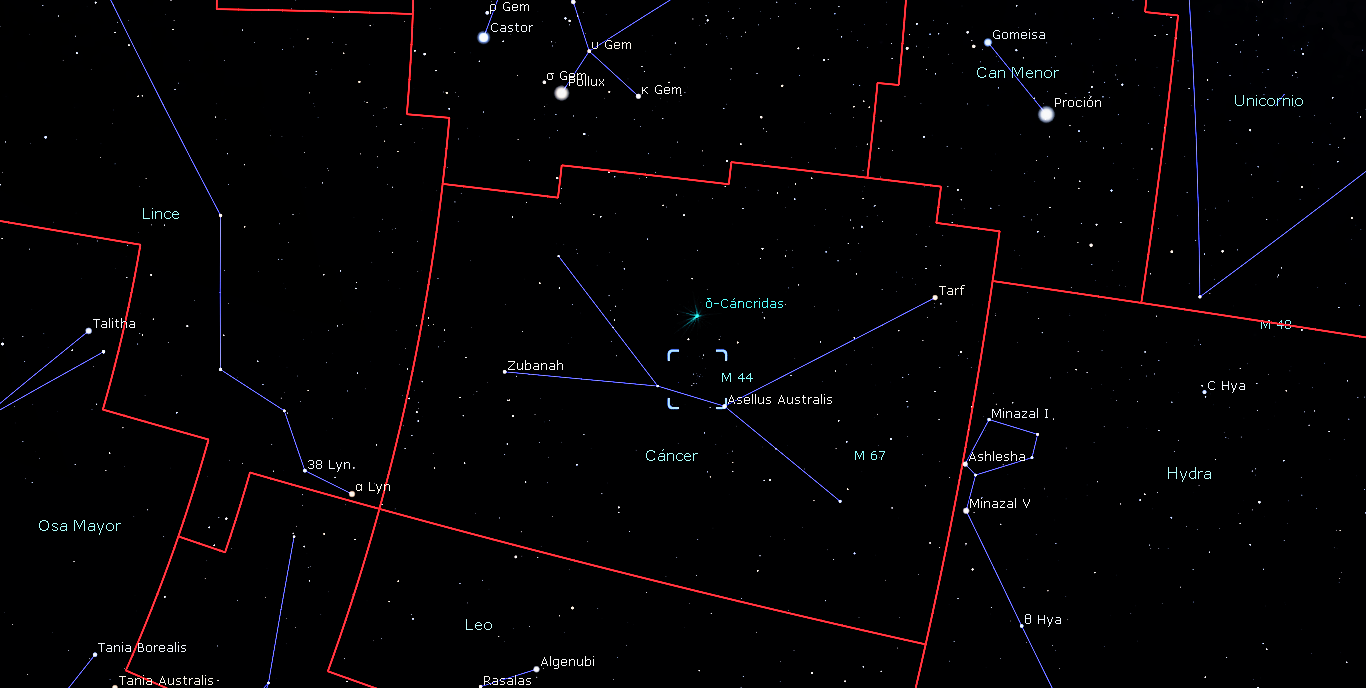 Challenge of the month: Iris, messenger of the gods

Iris is a goddess of Greek mythology, daughter of Taumante and the Oceanid Electra, and sister of the Harpies and Maple. In the Iliad she is one of the messengers of the gods.

Asteroid 7 Isis is one of the largest in the asteroid belt, it was discovered by John Russell Hind from the George Bishop Observatory in London, England, on August 13, 1847. Its diameter is estimated to be 200 kilometers.

On January 13, 7 Isis will be aligned with the Earth, on the opposite side of the Sun, which, astronomically speaking, is known as opposition. At the same time, Isis will be in perigee, that is, at its minimum separation from the Earth, located at a distance of 1,099 A.U. On this same date it will reach a maximum magnitude of 7.7, and will be located in the direction of the constellation Gemini, towards the eastern part of the celestial sphere. 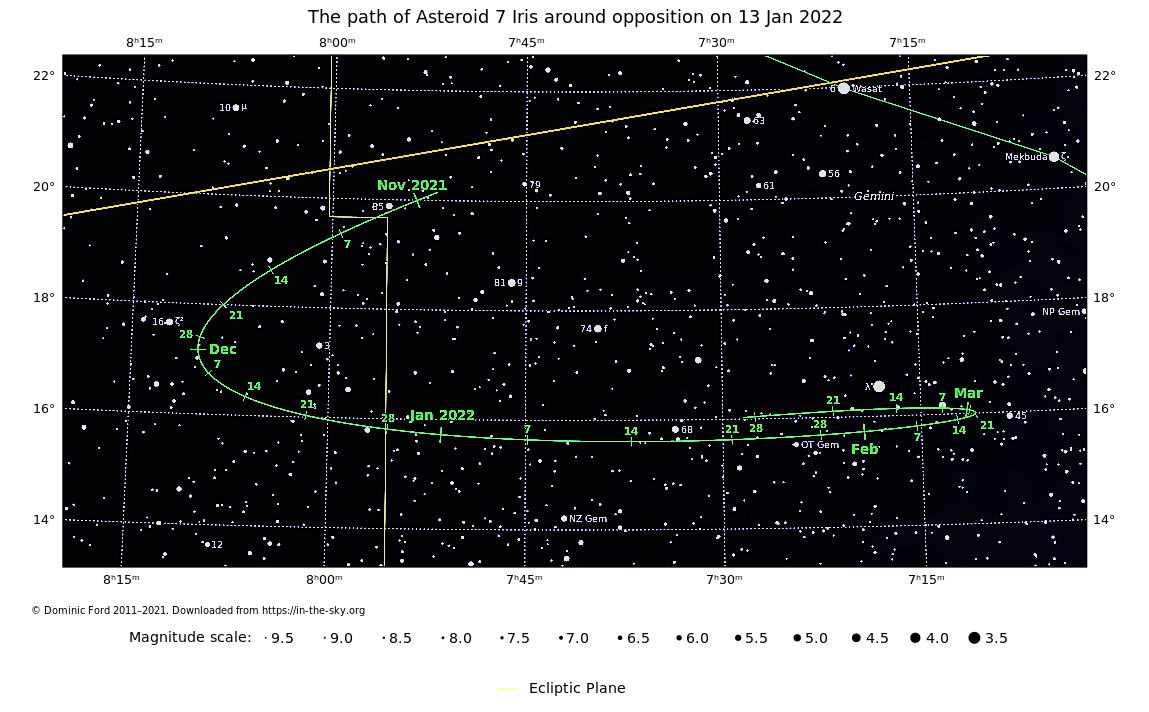 A real jewel of a cluster

The open cluster CMa, also known as the Pirate's Jewels cluster or NGC 2362, was discovered by Giovanni Batista Hodierna around 1654. It is located in the constellation Can Major, at a distance of 5,400 light-years from the Sun. Its brightest member is the star Tau Canis Majoris (CMa) which is located in the center of the cluster.

Despite its youth (4 or 5 million years) NGC 2362 is not surrounded by nebulosity, and this is logical, since it has more than thirty supergiant and red giant stars, such as the red hyper-giant VY Canis Majoris, as well as about a hundred dwarf stars, whose winds probably expelled the maternal gas.

NGC 2362 will already be well placed for observation, preferably with binoculars or a small telescope, in the direction of the constellation Canis Majoris, towards the southeastern part of the celestial sphere. 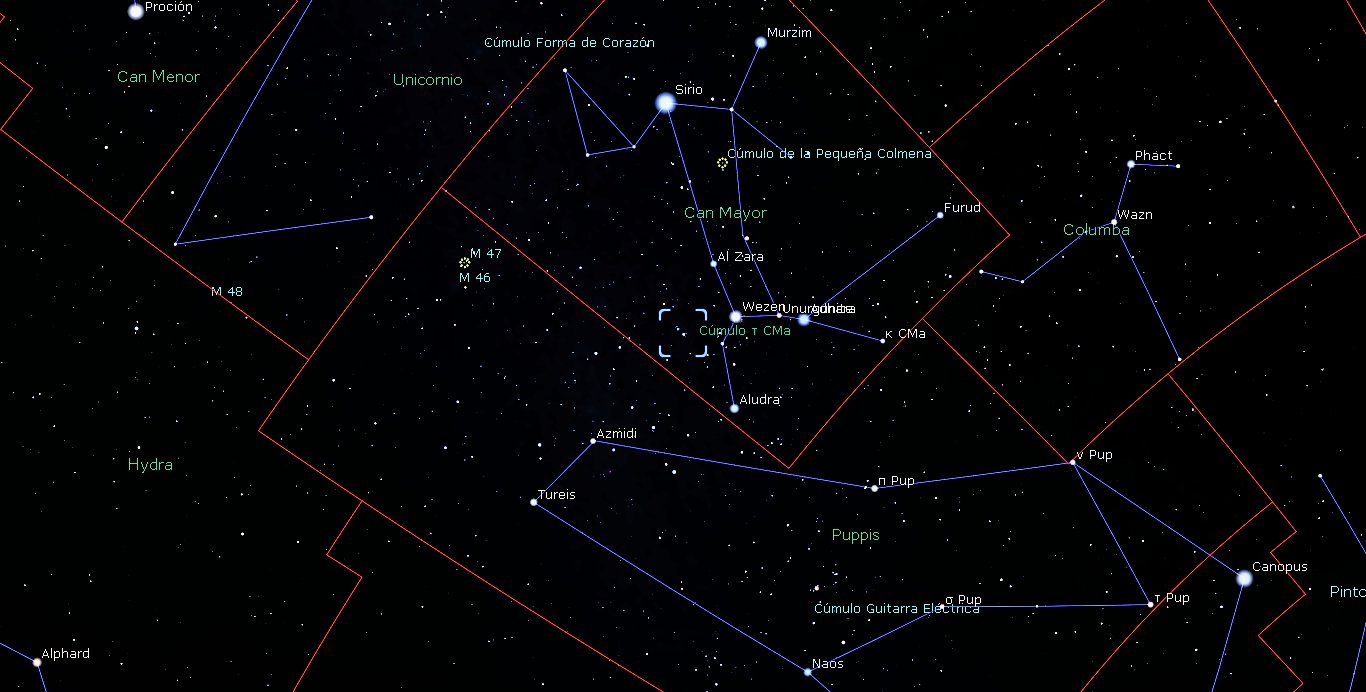 M47, a nebulosity between two dogs

In 1654 Hodierna discovered "a nebulosity between two dogs", a fact that went unnoticed until, in 1684, it was recorded in his work. This set the stage for Charles Messier to find it and designate it as M47 in 1771. However, due to an error in its coordinates it remained as a "missing object", as stated by John Herschell: "This cluster has not been observed again. It is probably a very poor and scattered one". It was Oswald Thomas who identified it again in 1784 and later William Herschell in 1785.

The open cluster M47 or NGC 2422 contains between 50 and 100 bright stars, distributed over an area of 12 light years in diameter, about 1,600 light years from Earth, its age is estimated at 78 million years and can be seen with the naked eye, as a faint nebulosity, in a sky free of light pollution, although it is always best observed with binoculars or a small telescope, in the direction of the constellation Puppis (Popa), towards the southeastern part of the celestial sphere. 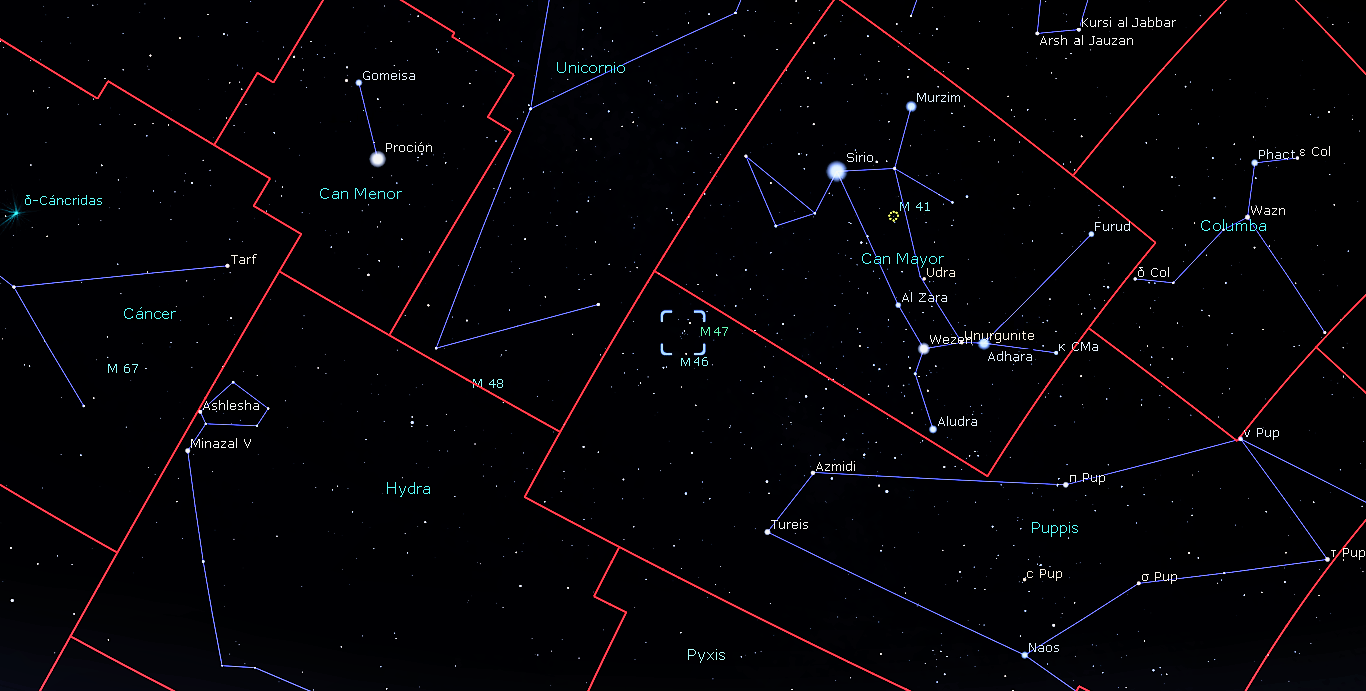 Watch the video of the January astronomical events in https://youtu.be/tuP7cURVbPQ