Astronomical events of the month of January 2023

Before starting, we would like to name all the collaborators of this monthly newsletter, thank you for following us and wish you success for 2023 and above all clear skies.

The year that begins will be full of astronomical surprises, including an annular eclipse of the Sun, the occultation of the planets Mars and Jupiter, which can be seen from most of the national territory, Venus will shine brightly, the Moon will have close encounters very attractive with several planets, in addition to many other astronomical events, we will also remember events or characters from astronomical history.

We will start the year recording a great leading character in astronomy of all times, Galileo. January is an excellent month to carry out celestial observations, given the weather conditions of the season, this will allow us to observe three open clusters and the first celestial "shower" of the year. The red planet will be a protagonist this month, since it will be well located for observation and will be covered by the Moon. The minor planet Pallas will shine intensely when it reaches its opposition and its maximum approach to the Earth and, as we already mentioned, we will have the approach and occultation of Mars by the Moon; To close with a flourish, the phases of our natural satellite could not be missing.

This mythical phrase is associated with the famous Italian physicist and astronomer Galileo Galilei, born in Pisa on February 15, 1564 and died in Arcetri on January 8, 1642. Initiator of the "Scientific Revolution" together with Johannes Kepler and who would come to his maximum expression of the hand of the English physicist isaac newton. In 1595, Galileo leaned towards the heliocentric Copernican theory, which held that the Earth and other planets revolve around the Sun, putting an end to the old models of Aristotle and Ptolemy, in which the planets revolved around a stationary Earth.

Through a small telescope, invented by the Dutchman Hans Lippershey in 1609, Galileo was fascinated and proceeded to improve this invention. Already with improved equipment, he observes the Moon and mentions "unlike what most people suspect, the Moon does not have a smooth and regular surface, but a rough one..., it is full of capabilities similar to mountains." and valleys of the Earth, but much larger". The discoveries of the four moons of Jupiter, called Galileans (Calixto, Ganymede, Io and Europa), the phases of Venus and the sunspots, led him to contract powerful enemies, faithful followers of Aristotelian and religious theories, which led him to face an ideological persecution that would culminate in a trial by the Inquisition, he was accused of introducing heretical doctrines and he was sentenced to house arrest until his death in 1642. 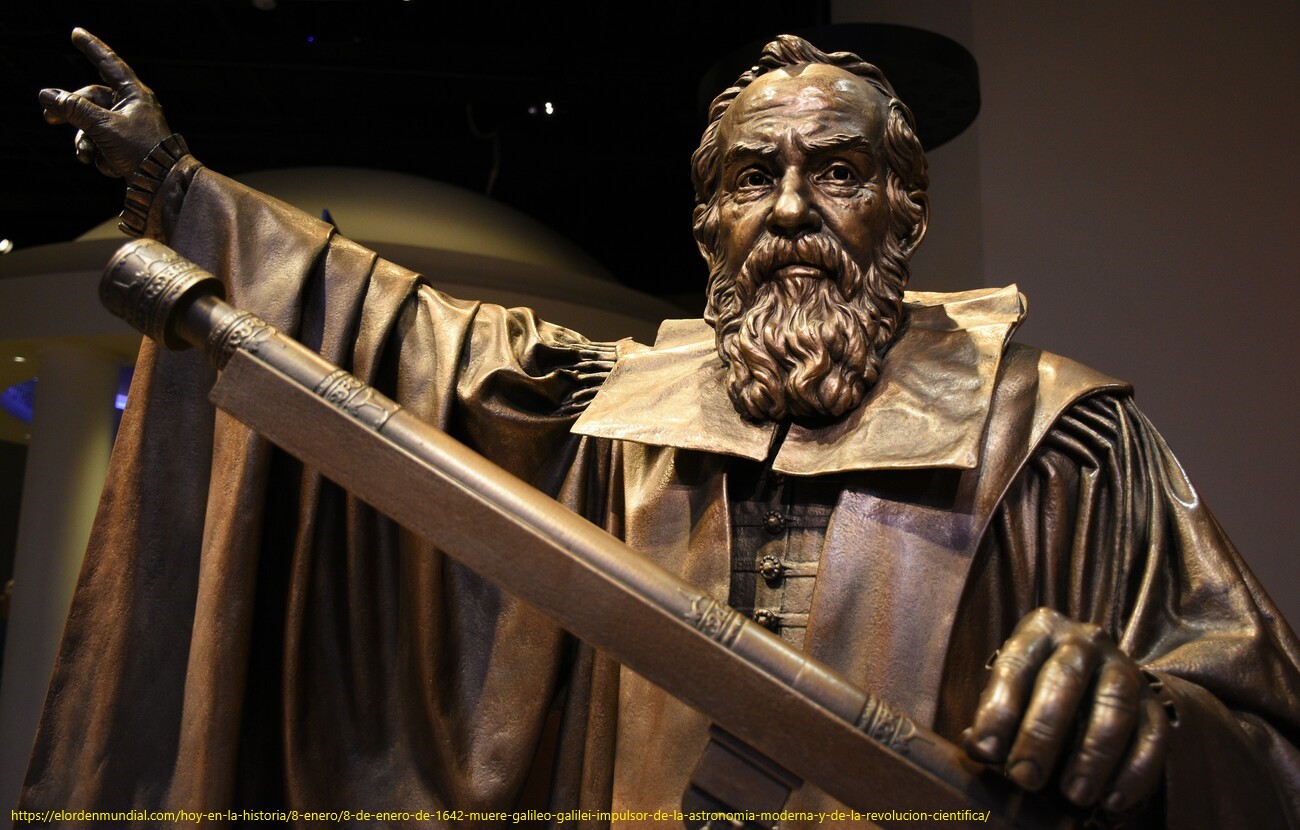 Given its conspicuousness in the winter sky, the open cluster M41 was surely detected since ancient times. Aristotle reduced it around 325 B.C., but it is considered that it was Hodierna, around 1654, who reported it for the first time. It was also noted by John Flamsteed in 1702, by Le Gentil in 1749, and was included in Charles Messier's catalog in 1765.

This cluster is easy to locate, since it is located in the heart of Canis Major, in the constellation of the same name, very close to Sirius, the brightest star in the firmament, about 4° southwest of it. Because M41 is a relatively bright cluster, it has been possible to study and determine its parameters with some accuracy; it contains a hundred stars distributed in a volume of about 26 light years in diameter, a distance between 2,300 and 1,600 light years from Earth and has an estimated age between 190 and 240 million years. Cluster M41 will be well located for observation most of the night and with binoculars or a small telescope we will be able to enjoy a magnificent image, towards the southeast part of the celestial sphere. 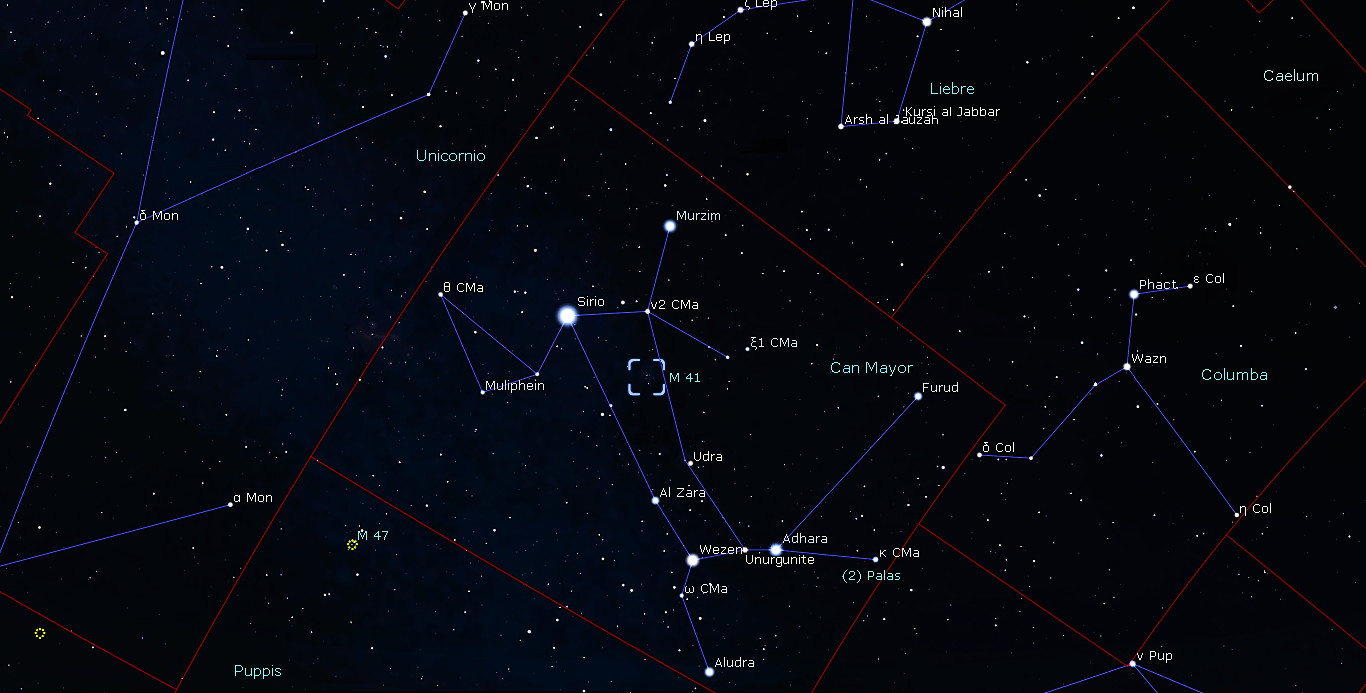 A veritable downpour, the Quadrantids

This strong meteor shower, the Quadrantids, is active between December 12 and January 12, with its maximum on January 3. The maximum observable rate will be 120 meteors per hour. The radiant, or point where the meteor shower appears to originate, is in the direction of the constellation of the Boyero. The minor body 2003 EH1 and comet C/1490 Y1 are responsible for this shower. The best time to observe them will be a few hours before sunrise on January 4, when the radiant rises above the northeast horizon of the celestial sphere. 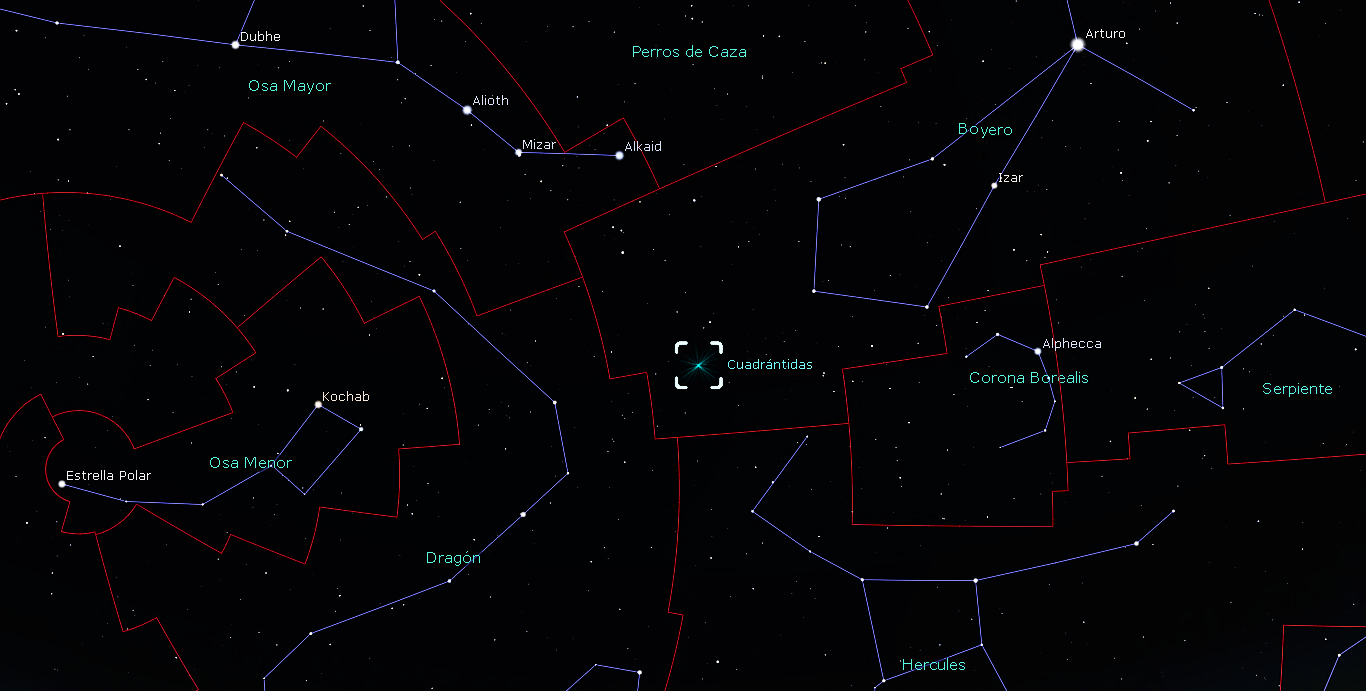 The best time to observe 2 Pallas

Between the planets Mars and Jupiter there is a huge number of small rocky bodies that make up the so-called Main Asteroid Belt, they are located between 2 and 4 astronomical units from Earth, its two largest bodies are the dwarf planet Ceres and the asteroid 2 Pallas. This last object was discovered in 1802 by the German astronomer Heinrich Wilhelm Olbers while making observations to find and determine the orbit of Ceres. It was named in honor of the Greek goddess of wisdom, science and art.

As expected, the best time to observe a celestial object is when it is furthest from the Sun (in opposition) and closest to us (in perigee). Pallas in opposition, when the asteroid is located exactly opposite the Sun, that is, when the Sun reaches its greatest distance below the horizon at midnight and at the same time, the opposite point to it is the highest in the night sky. Pallas in perigee, when the asteroid is closest to Earth, in this case Pallas will pass 1,417 astronomical units from us, reaching a maximum brightness of 7.7 magnitudes. However, even at its brightest, 2 Pallas is a faint object beyond the range of the naked eye, so binoculars or a moderate-aperture telescope are needed to appreciate it.

One of Messier's Lost and Found

The cluster M47 was described by Hodierna, before 1654, as "a nebulosity between two dogs", but its discovery was attributed to him until 1684 when it was established in his work. In 1771 Charles Messier found it and designated it M47. Messier made a miscalculation in describing its location and was therefore for a long time considered one of the so-called lost Messier objects, as stated by John Herschel saying “This cluster has not been observed since”. William Herschel later rediscovered it in 1785, but it was not until 1934 that Oswald Thomas realized that Messier's Object 47 was the same as the nebula cataloged as NGC 2422.

The open cluster M47 contains between 50 and 100 bright stars, distributed over an area of 12 light years, about 1,600 light years from Earth, its age is estimated at 78 million years and it can be seen with the naked eye as a faint nebulosity. in a sky free of light pollution, but it will always be better to observe it with binoculars or a small telescope, in the direction of the constellation of Puppis (Popa), towards the southeast part of the celestial sphere. 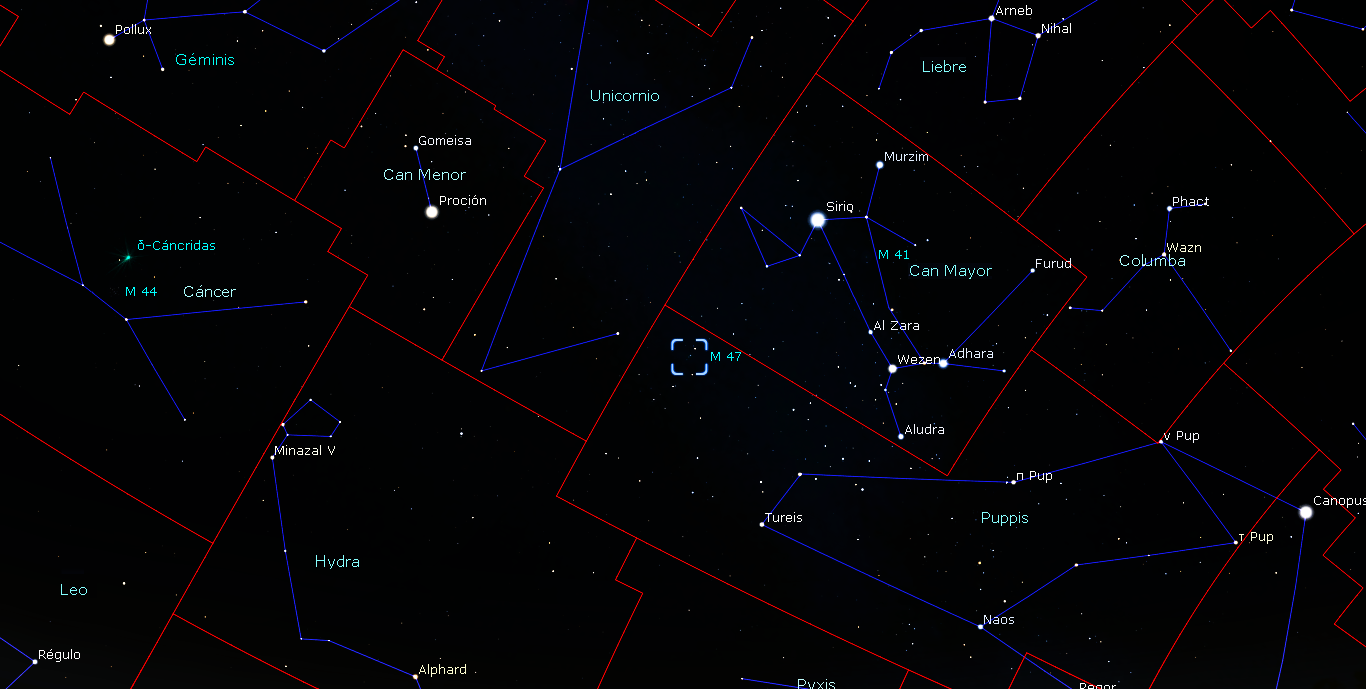 The open star cluster M44, El Pesebre, Praesepe, Cúmulo de la Colmena, NGC 2632, Cr 189 or Mel 88, has been observed and described since ancient times. Erastothenes associated it with the donkeys that the gods Dionysus and Silenus rode in battle against the Titans. Aratos, around 260 B.C., mentions it as "a small mist". Hipparchus (130 B.C.) included it in his star catalog and called it "the little cloud" or "cloudy star." Ptolemy mentions it as one of the seven "nebulae" in his Almagest. According to Burnham, it appeared in the letter of Johann Bayer (1600 AD) as "Nubilum" ("Cloud"). Galileo defines it as "nebulous" and reported it: "the nebula called Praesepe is not a single star, but a mass of more than 40 small stars." It was probably seen and resolved in 1611 by Peiresc, the discoverer of the Orion Nebula, and resolved as a cluster by Simon Marius in 1612. Charles Messier added it to his catalog as M44, in 1769.

M44 is currently considered to have around 200 stars and is located 577 light years from Earth, with an estimated age of 400 million years. As a curious fact, the age and direction of its movement almost coincide with the same elements of the Hyades, another famous cluster, so it could be believed that these two clusters, today separated by hundreds of light years, could have a common origin, in some great diffuse gaseous nebula that would have existed 400 million years ago. M44 will be well positioned for viewing most of the night towards the eastern part of the celestial sphere and you will need binoculars or a small telescope to enjoy this incredible cluster. 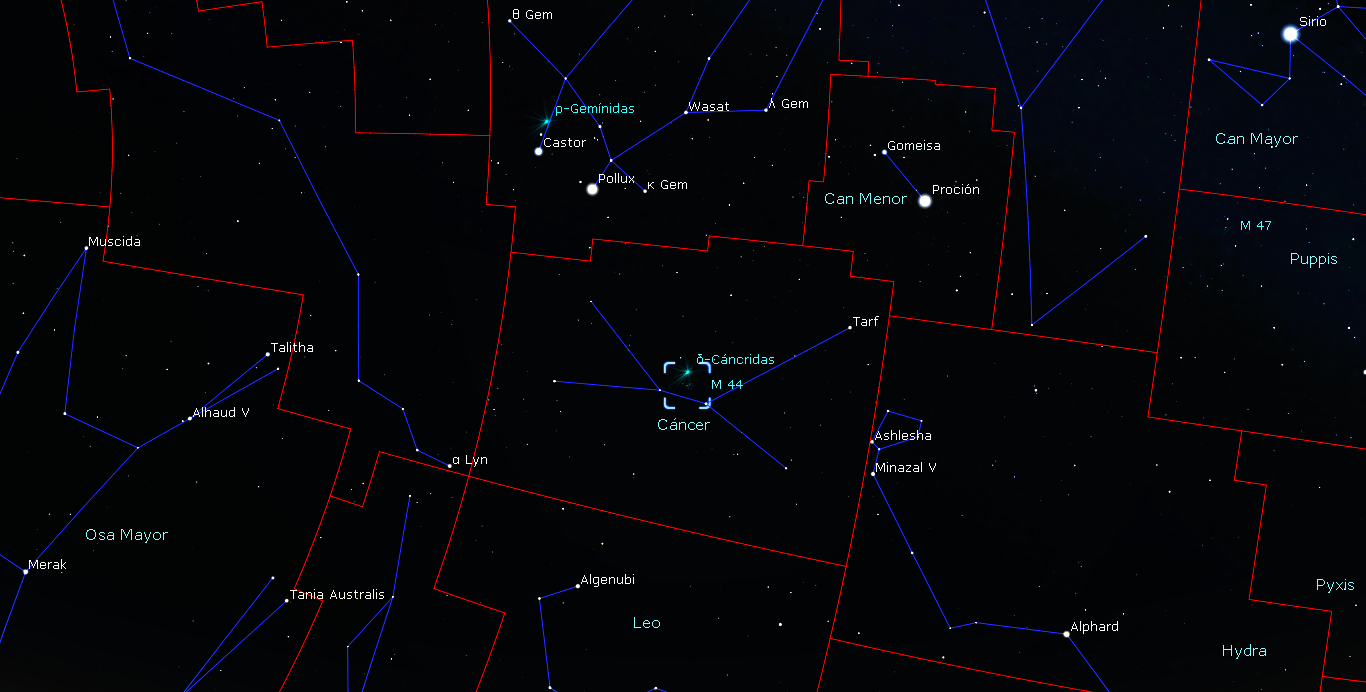 Now you see it and now you don't

Astronomically speaking, an occultation is a phenomenon that takes place when a celestial object is hidden, covered or concealed by another celestial object that passes in front of it, that is, it passes between the object before 1654 and the observer.

In the case of occultation of planets by the Moon, it refers to our satellite covering a planet if we look at it from Earth. This is due to the particular type of geometric arrangement between the bodies that compose it, since each celestial body, which revolves around the Sun, and the Moon, which revolves around our planet, do so in orbits of different sizes and speeds, so they tend to be aligned, from our point of view.

This January 30, at 22:27 (January 31 at 04:27 Universal Time) the Moon will pass in front of Mars and for a few minutes it will be hiding the red planet, in the direction of the constellation Taurus. 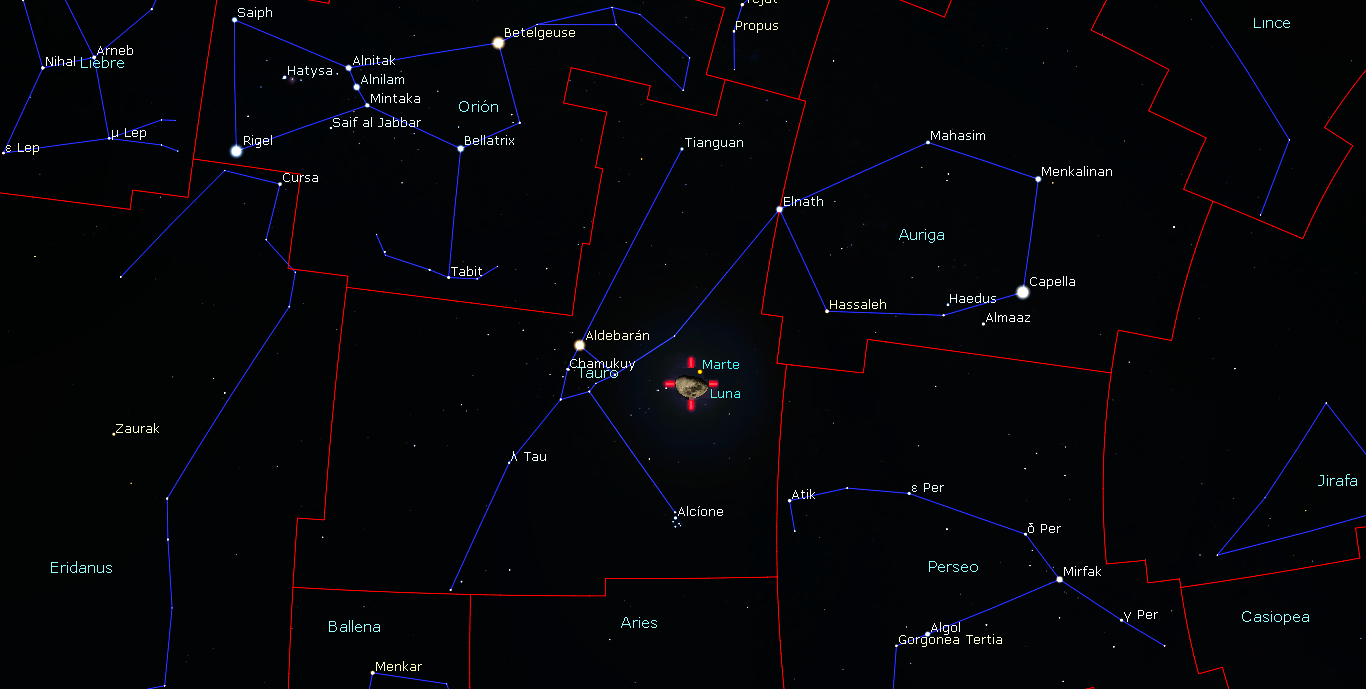