Santa María Tonantzintla, Puebla, January 11th, 2022. The UNAM Institute of Physics awarded Dr. Héctor Manuel Moya Cessa, a researcher at the National Institute of Astrophysics, Optics and Electronics (INAOE), the Marcos Moshinsky Medal for his contributions in the area of ​​Quantum Optics and in recognition to his scientific career.

This award, which bears the name of the outstanding physicist Marcos Moshinsky, distinguishes the notable contributions of scientists in Mexico in the field of Theoretical Physics. 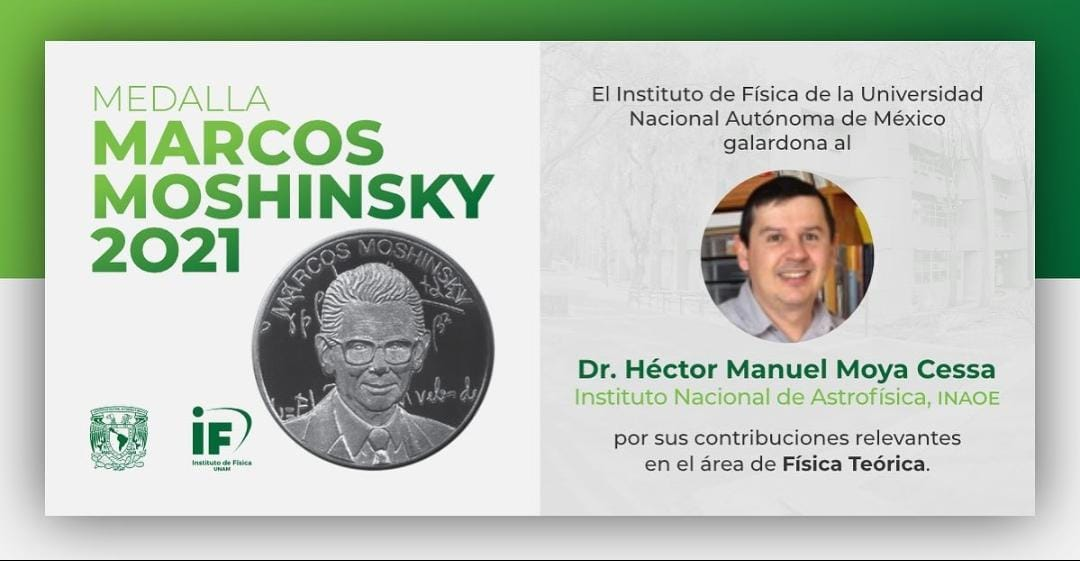 Héctor Manuel Moya Cessa was born in Acayucan, Veracruz in 1966. He completed undergraduate studies at the Universidad Autónoma Metropolitana Unidad Iztapalapa, a master’s degree at the Center for Research in Optics in Guanajuato, and a doctorate at the Imperial College of Science, Technology and Medicine in the University of London.

Dr. Moya Cessa is a specialist in quantum optics and information and his lines of research are the study of light propagation in homogeneous and inhomogeneous media to the interaction of light with trapped ions, the interaction of atoms with quantized light and analogies between classical and quantum systems. He has graduated 18 doctoral students, 14 master’s students and several bachelors students.

He has 198 articles in international journals including Nature Photonics, Nature Communications, Quantum Science and Technology, Scientific Reports, Physical Review Letters, Physics Reports, npj Quantum Information, Optics and Progress in Quantum Electronics, among others. He is the author of three books and editor of one.

He received the award of the International Commission for Optics-International Center for Theoretical Physics (Trieste, Italy), which recognized him "for his great quality in research on the foundations of Quantum Optics and for his interest in activities organizations aimed at promoting Quantum Optics in Latin America” (2006). He also received the award from the Mexican Academy of Sciences (for those under 40 years of age, in 2006) and the State of Puebla Science Award (2006).

He has been a Fellow of the Alexander von Humboldt Foundation since 2006, and was named a Faculty Graduate Scholar of the University of Central Florida in 2013.

He was president of the Quantum Information Division of the Mexican Physical Society between 2011 and 2013. He is a level III member of the National System of Researchers. He has an h-index of 34 (35) and 3007 (3177) citations in the Web of Science (Scopus), 16 of which are for two 2012 Physics Nobel Laureates (Serge Haroche and David Wineland).

He is a referee in various journals and is and has been a member of the editorial committees of Applied Mathematics & Information Sciences, Journal of the European Optical Society: Rapid Publications, Revista Mexicana de Física, Quantum Reports and Alexandria Engineering Journal.

He has participated in various evaluation committees of Conacyt, in the Committee for the Selection of Fellows of the “Researchers” program of the COMEXUS Fulbright-García Robles scholarship, in the Commission for the Evaluation of Interdisciplinary Projects of International Impact (Buenos Aires, Argentina, April 20 and 21), in the committee "Where is Physics going in Mexico", Quantum Physics and Quantum Information section and in the UC-MEXUS committee in June 2018 in Riverside, California.

He has organized international conferences and has been an invited international speaker at various congresses. From 2001 to 2015 he was a Regular Associate of the International Center for Theoretical Physics. He is a founding member of the Academy for the Advancement of Science, Technology and the Humanities of the state of Puebla. He has participated in two international projects STINT (Sweden) with Dr. Gunnar Björk (Kungl Tekniska Högskolan, Stockholm), which included visits and exchange of students (paid exclusively by the Swedish agency) and a Quantum Information Millennium Project with Dr. Luiz Davidovich, from the Federal University of Rio de Janeiro. He co-organized the Spring School: Nonlinear and Multiscale Photonics in Tucson, Arizona, in 2005. He has been invited to teach two Quantum Optics courses, in Cusco, Peru, in 2004, and in Tucson, United States in 2005.