Astronomical events of the month of May

Although this month always offers us a series of spectacular events, this time a total lunar eclipse stands out, which will be visible throughout the Mexican Republic. Likewise, May gives us the opportunity to observe an approach between bright planets, a meteor shower, several objects from the Messier Catalog (the challenge of the month) and we could not miss the ephemeris of our satellite, the Moon, but first let's review this data.

The astronomer who discovered the chemical composition of stars

Cecilia Helena Payne-Gaposchkin was an astronomer born on May 10, 1900 in Buckinghamshire, United Kingdom, and died in Cambridge, Massachusetts, United States on December 7, 1979. She was part of a group of brilliant women who studied the cosmos, known like the “Harvard Calculators”. In her doctoral thesis, which she defended in 1925, she showed that hydrogen is the main component of stars, earning her work to be regarded as "the most brilliant doctoral thesis ever written in astronomy." Her revolutionary discovery completely changed the way we see the Universe. 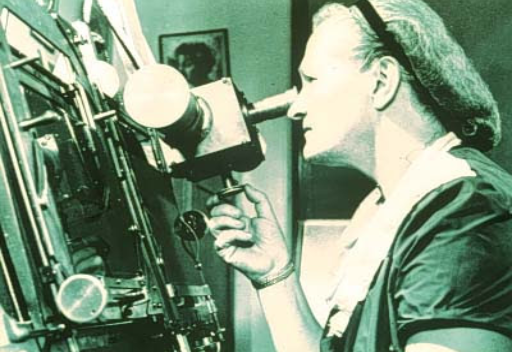 Total Lunar Eclipse (Miztli cualo or when the Moon is eaten)

On May 15 at 8:33 p.m., central Mexico time, the lunar eclipse begins, at 9:28 p.m. the partial phase will begin, at 10:30 p.m. totality begins, having its midpoint at 11:12 p.m. The total eclipse will end at 11:54 p.m., the partial phase will see its end at 00:55 a.m., already on May 16, and finally, the eclipse will reach its consummation at 01:51 a.m. Fortunately, we will be able to enjoy this attractive astronomical event throughout the Mexican Republic. The Moon will be in the direction of the constellation of Libra, towards the southeastern part of the celestial sphere (see table and map).

Make way for the venerable

This month we recommend locating and observing a true relic of the Galaxy, the globular cluster M5, NGC 5904 or Pink Cluster, in the constellation of the Serpent. Initially observed in 1702 by the couple Golffried Kirch and Maria Margarethe, Messier rediscovered and cataloged it in 1764, describing it as a nebular object; William Herschel was able to resolve (identify) stars in that small cloud until 1791. It is estimated that it has 100,000 stars and that it is 24,500 light years from us, it is also believed that it is 13,000 million years old, with a diameter 130 light years, making it truly one of the largest and longest-lived. It can be seen with the naked eye, with very good visibility conditions, with binoculars a small misty spot can be distinguished and with a small telescope a bright cloud can be seen towards the center, however, with telescopes larger than 10 cm in aperture, rings will be observed concentric brilliants and some stars. 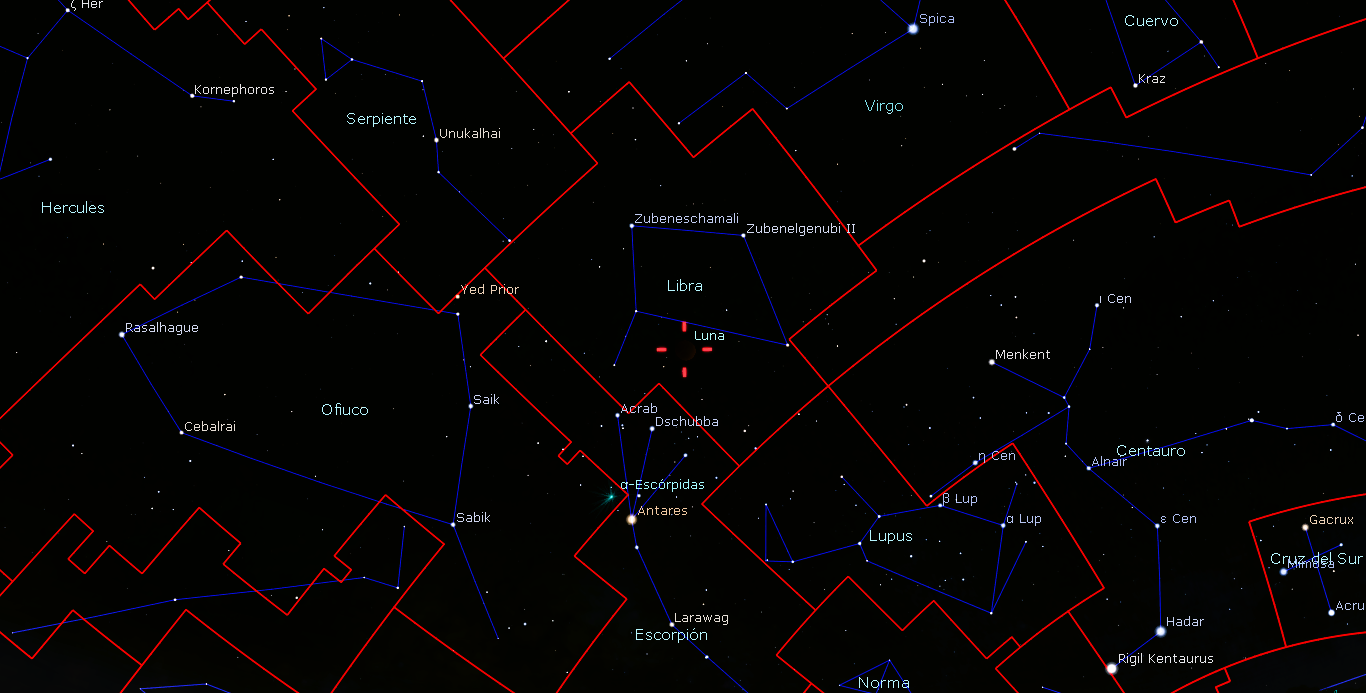 The η-Aquarid meteor shower will be active from April 19 to May 28, with its maximum on May 6. The maximum observable rate will be 40 meteors per hour. The radiant is in the direction of the constellation of Aquarius, with coordinates AR=22h30m, DEC=- 1º00´. The object responsible for this rain is comet 1P/Halley, it will be observable in the early hours of May 6, towards the eastern part of the celestial sphere. 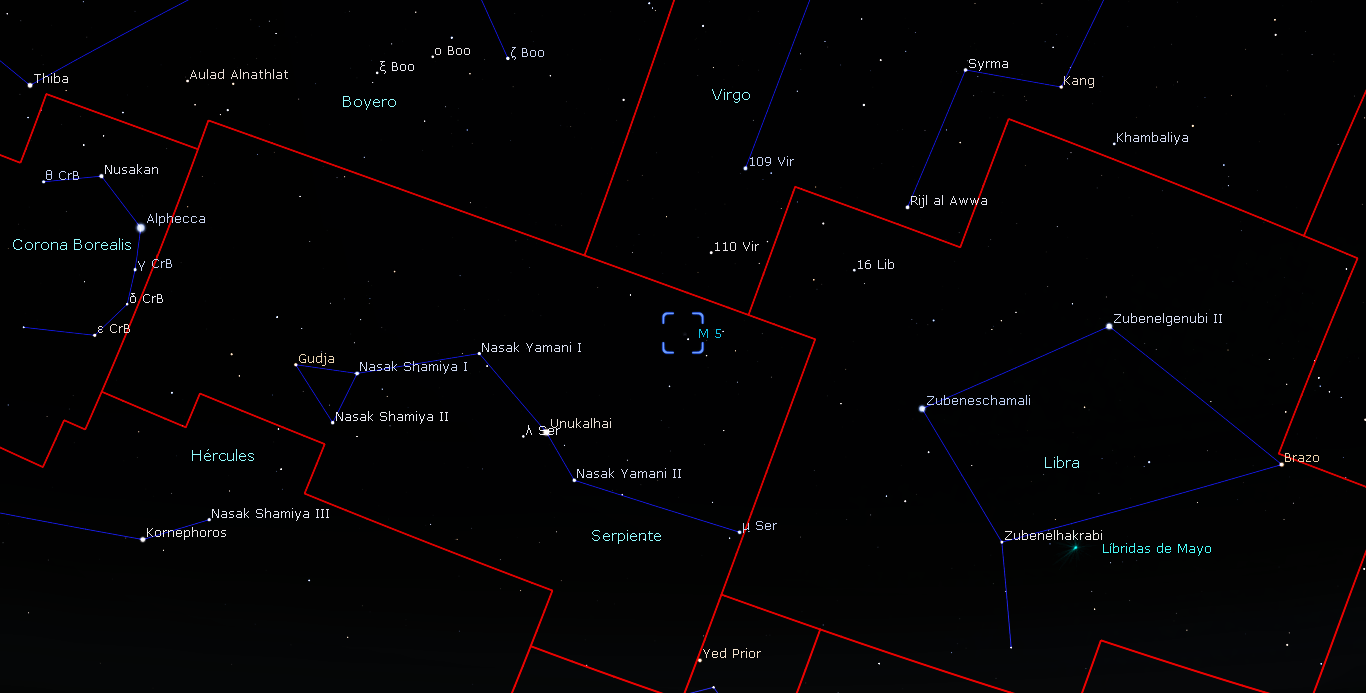 In the direction of the Hercules constellation we can observe one of the most impressive globular clusters in the sky, the Great Hercules Cluster, technically known as M13 or NGC 6205. It was observed for the first time by Edmund Halley in 1974, who described it by saying “ it is like a small patch, which is shown to the naked eye when the sky is calm and the Moon is absent”, in its time thousands of stars could be seen, now we need binoculars or a small telescope to observe this object. The cluster M13 is located about 25,000 light years away, 150 light years in diameter and contains around 100,000 stars, among the oldest in the Galaxy. As a curious fact, the cluster M13 was part, in 1974, of the celebrations for the inauguration of the Arecibo Observatory, it was selected as a target to send a radio signal in search of extraterrestrial civilizations 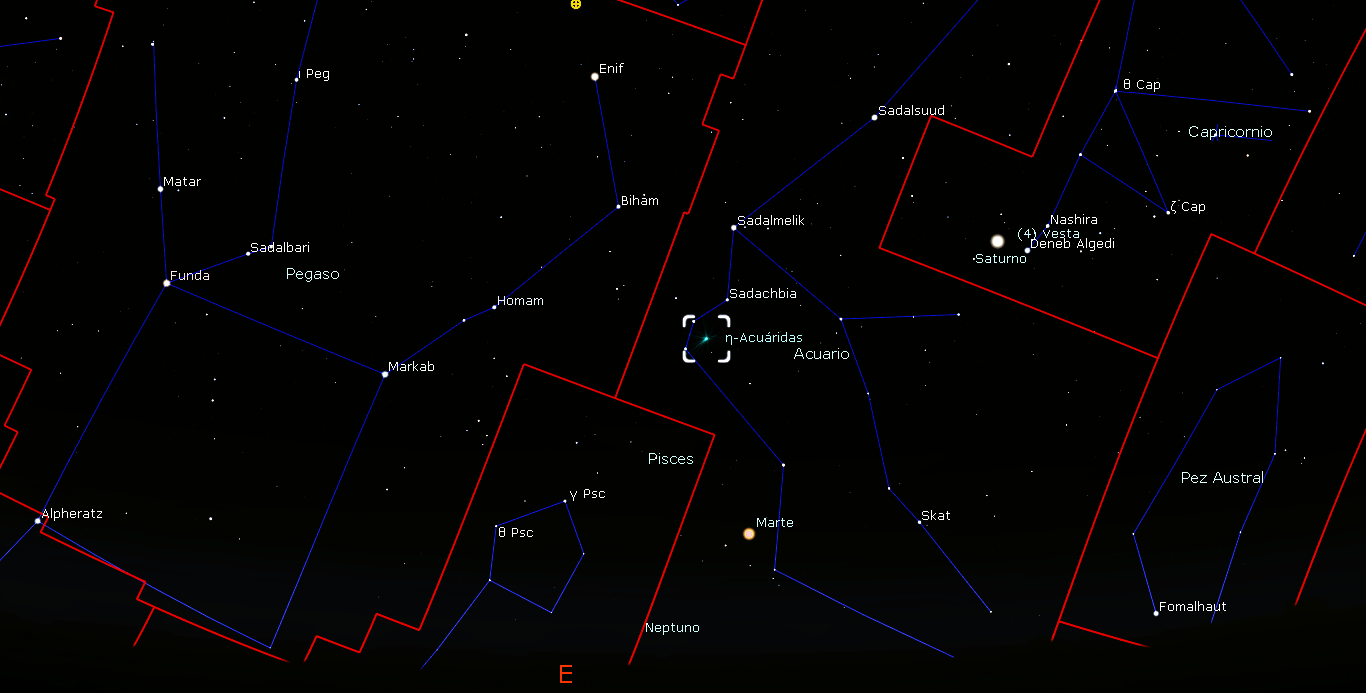 At dawn on May 24 we will have a good opportunity to appreciate with the naked eye the approach of 5 of the brightest objects in the night sky: Venus, Jupiter, Mars, the Moon and Saturn, very close to the Moon and Mars in conjunction, that is, when both objects share one of their coordinates, the Right Ascension. At this time, the red planet will pass 1° 28' south of the Moon. The approach will be observable at dawn in the direction of the constellation of Pisces. 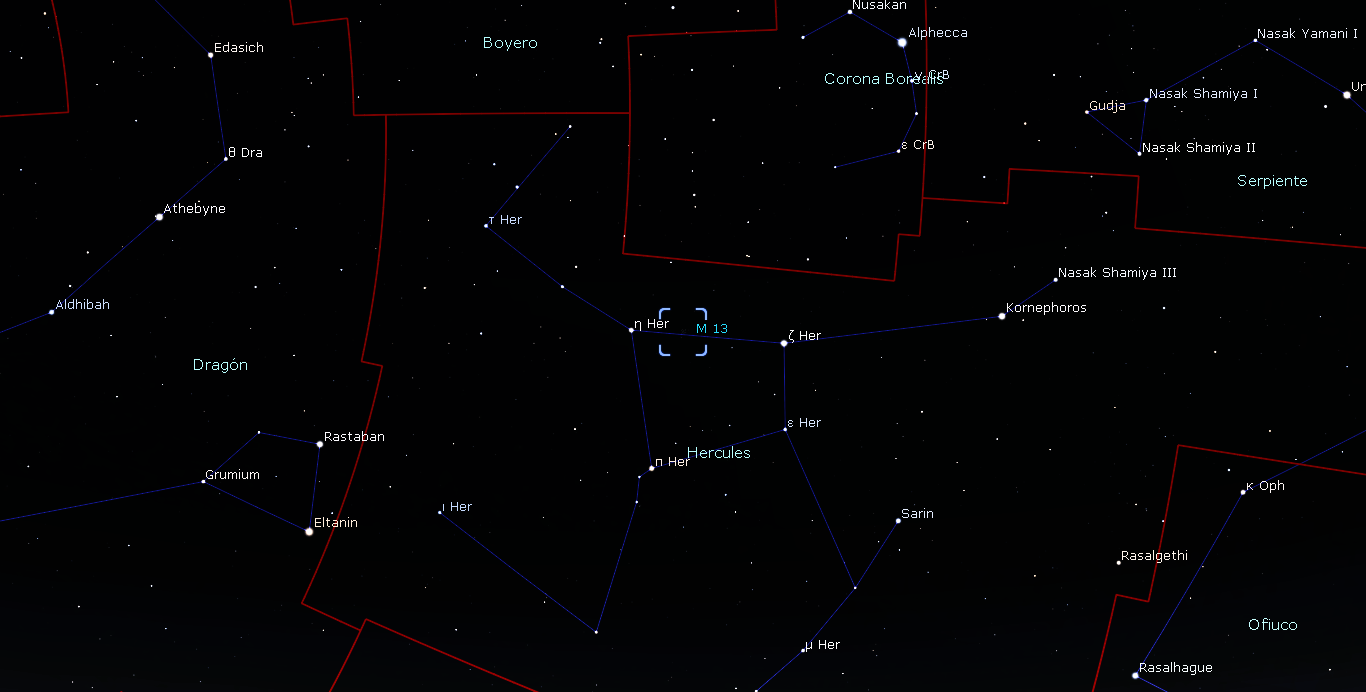 A striking cluster in the Scorpion

Globular clusters are almost spherical groupings of hundreds of thousands, and even millions, of stars that are gravitationally bound to each other and that orbit around galaxies, as if they were their satellites. They are formed by the oldest stars in the galaxy, with ages greater than 10,000 million years, since they were formed at the same time as our galaxy. About 150 groups of this type are known in the Milky Way.

The globular cluster M4 (Crab Cluster, NGC 6121 or Mel 144) was discovered by De Chéseaux between 1745 and 1746 and was cataloged in 1764 by Messier as M4, a "cluster of very small stars"; It is located about 7,200 light years away from us, making it one of the closest, located in the sky in the constellation of the Scorpion, in the direction of its brightest star, the red supergiant Antares (α Sco). With an apparent magnitude of 5.6 and an angular size of 36 arcminutes (similar to the Moon, which has 30 arcminutes), which can be seen with the naked eye in very dark skies, it has about 100,000 stars and, like most globular clusters, is very old (about 13 billion years), will be well placed for observation during the next 4 months, towards the southeast of the celestial sphere. 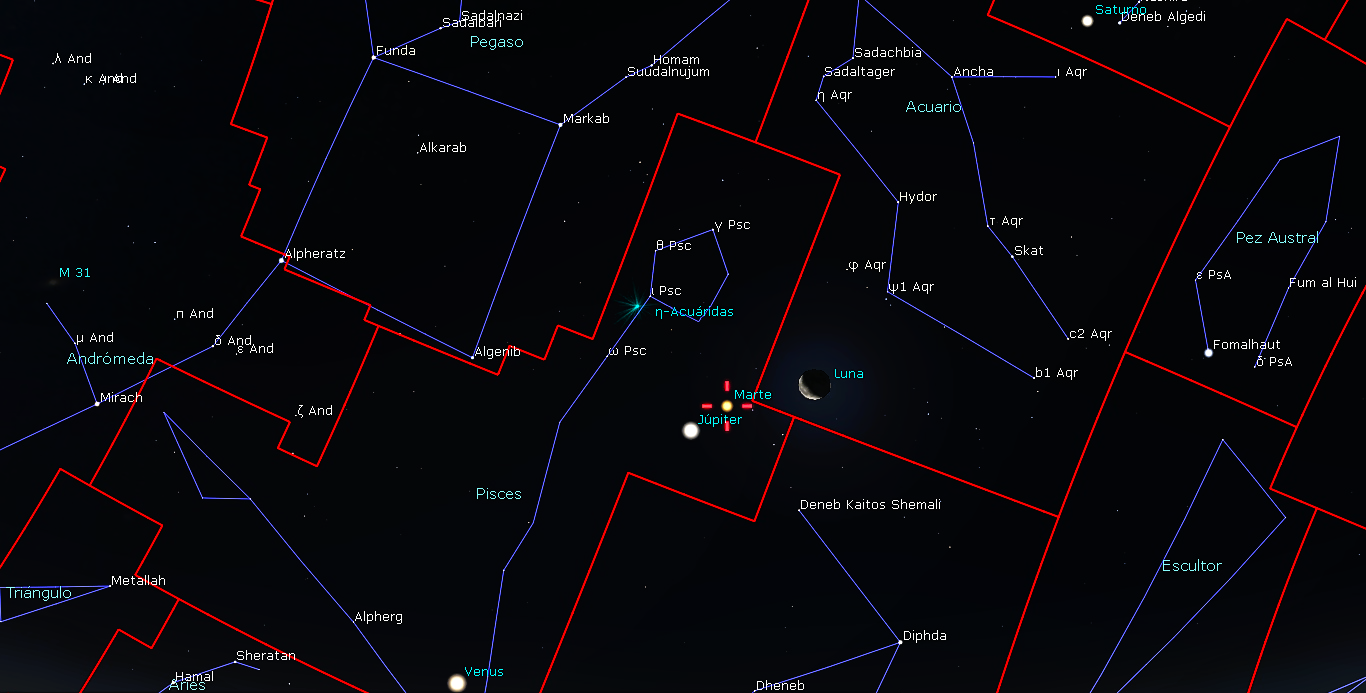 Watch the video in https://youtu.be/oXyR7jmCRiw