Astronomical events of the month of June 2022

Undoubtedly, June is one of the most anticipated months of the year, since summer arrives, synonymous with sun, rest and vacations. So it is hoped that many people will have the opportunity, weather permitting, to observe two moderate meteor showers, as well as some interesting Messier objects, this as a challenge of the month, and of course the various phases of the Moon. Before we start, let's welcome summer.

On June 8, 1975, the Venera 9 or Venus 9 spacecraft, part of the Soviet program of the same name, was launched. Venera 9 consisted of an orbiter and a lander, which separated from the orbiter on October 20, 1975, and with it began the Venusian adventure, touching the surface of the planet on the 22nd of the same month. The cooling system, prior to entry, allowed the ship to operate for 53 minutes, before being practically melted and crushed, given the conditions of temperature (485 °C) and pressure (90 atmospheres, equivalent to 1 km below the terrestrial oceans) and chemical compounds such as ammonia and acids. Fortunately, it was enough time to send us important information about its clouds (30-40 km wide and 30-35 km high), its chemical composition and the first images of its surface. 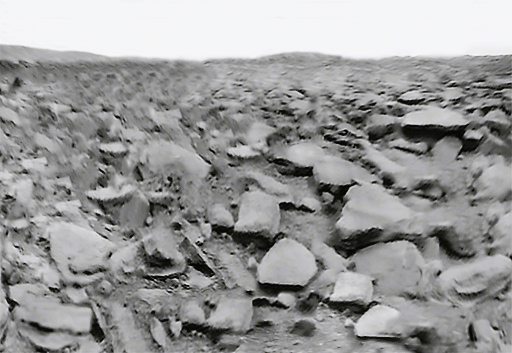 Another big cluster in the Scorpion

The globular cluster Messier 80, M80 or NGC 6093 is located in the direction of the Scorpion constellation, as is the spectacular globular cluster M4. Messier 80 was discovered by Charles Messier in 1781. William Herschel, around 1785, was the first to distinguish stars, commenting "it is one of the richest and most compressed clusters of small stars that I remember seeing." The cluster looks like a small, but bright, round ball with a bright core. The brightness of its surface decreases towards the outer regions, appearing to be a comet; It is estimated to be about 32,600 light years from us, with an angular size of 9 minutes of arc, equivalent to 95 light years in diameter. It contains several hundred thousand stars, making it one of the densest globular clusters in the Milky Way, with an estimated age of 13.5 billion years. M80 will be well placed for viewing most of the night, to the southeast of the celestial sphere. 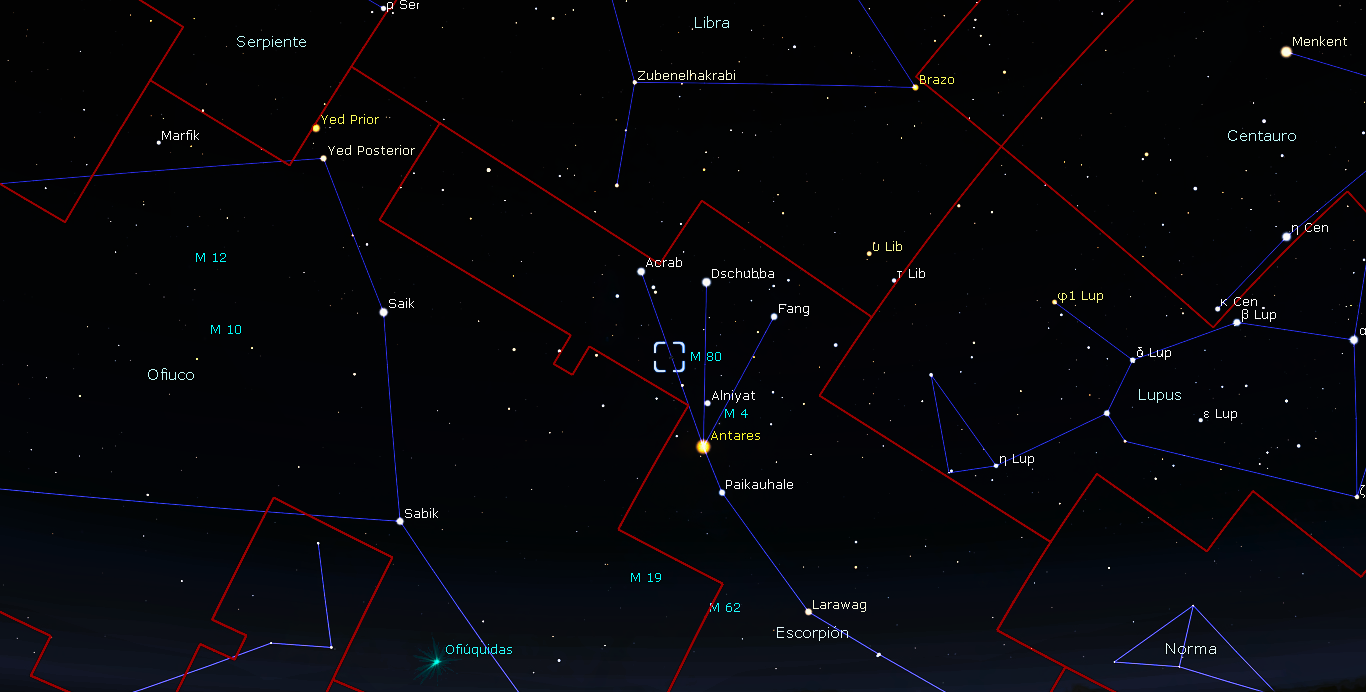 The globular cluster M10 or NGC 6254 is located in the Ophiuchus constellation and was discovered by Charles Messier in 1764, who described it as a "nebula without stars"; Johann Elert Bode observed it and referred to it as "A nebulous patch without stars"; being William Herschel who defined it as a set of faint stars in "A beautiful cluster of compressed stars". It is estimated that M10 reaches about 20 minutes of arc, just over half a full moon, which at a distance of 14,300 light years, corresponds to a linear diameter of 83 light years, while its bright core is only about 35 light years. The globular cluster M10 contains on the order of 100,000 mostly evolved stars with ages of 11.4 billion years and is an 8th magnitude object, becoming visible with binoculars or small telescopes. 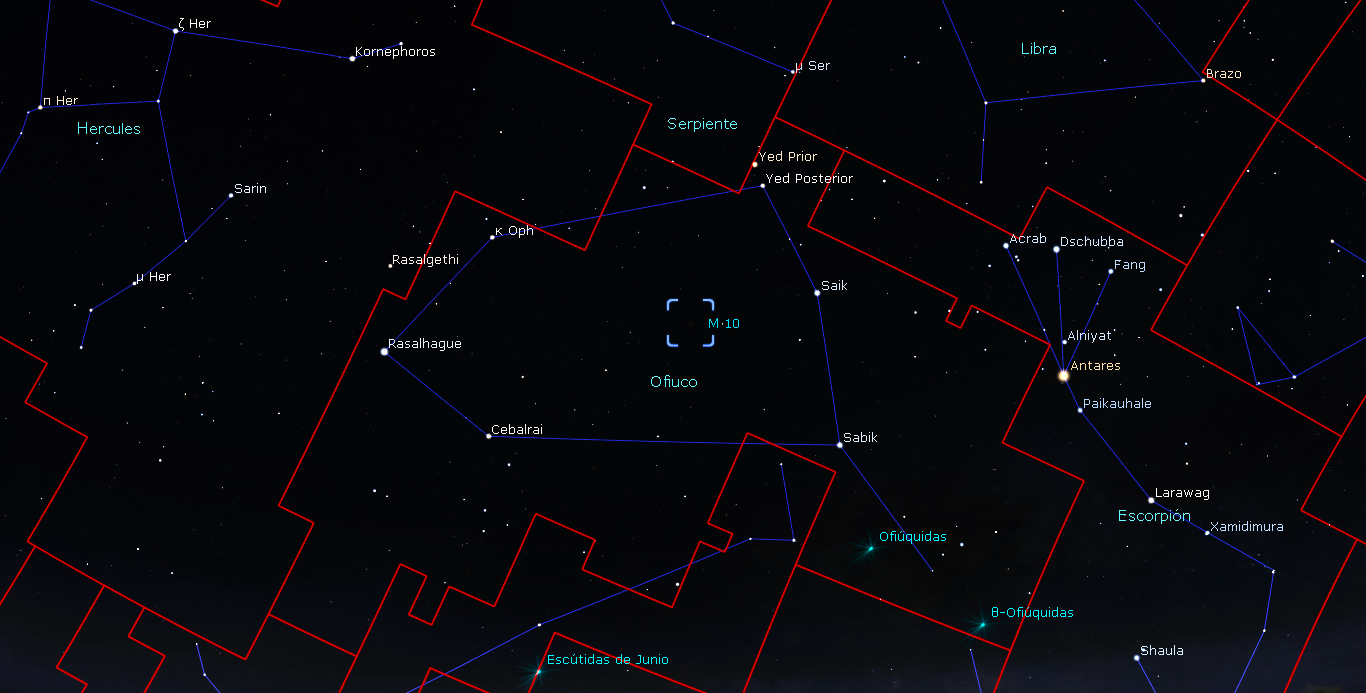 A moderate to heavy rain

The Arietids meteor shower will be active from April 14 to June 24, with its maximum on June 10. The maximum observable rate will be 50 meteors per hour. The radiant is in the direction of the constellation of Aries, with coordinates AR=02h59m, DEC=+24º00´. Comet 96P/Machholz has been identified as the celestial body responsible for the shower. The best time to observe it will be the early hours of June 10, despite being very close to the northeast horizon of the celestial sphere. 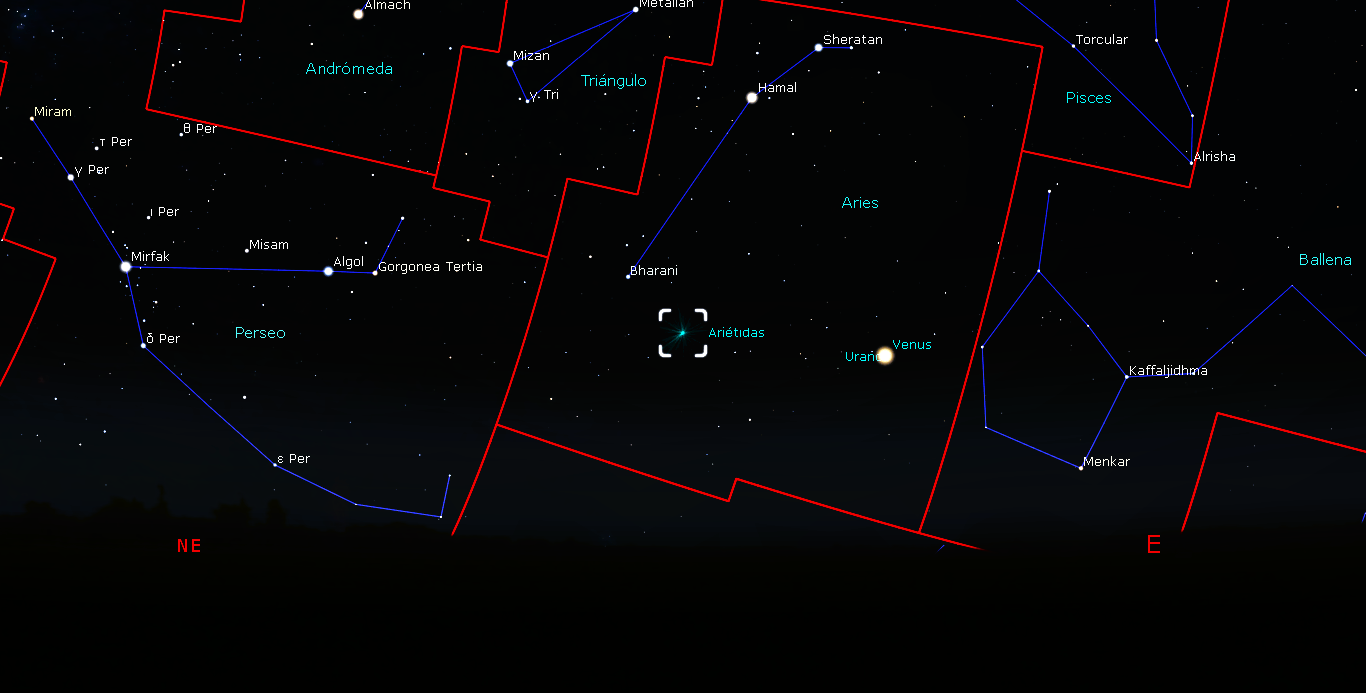 The misunderstood and shadowed cluster M92

The globular cluster M92 or NGC 6341 is located in the direction of the constellation of Hercules, discovered by Johann Elert Bode in 1777 and some years later (1781) also perceived by Charles Messier, however it was William Herschel who was able to resolve it as a cluster of stars. The cluster M92 is located at a distance of 26,700 light-years, slightly farther than its bright neighbor M13; it is assigned an age of 11 billion years and 330,000 stars are estimated to be housed in a diameter of 14 minutes of arc or 109 light years. The M92 cluster is an easily detectable object with binoculars or small telescopes, given its apparent magnitude of 6.4. M92 will be well placed for observing part of the summer and fall, to the northeast of the celestial sphere.

A star cluster that formed when dinosaurs lived on Earth

The open cluster M6, the Butterfly Cluster or NGC 6405, in the constellation Scorpion, is made up of 80 extremely young, blue stars, with a few exceptions, such as the variable orange giant BM Scorpii. Most of these stars have ages ranging from 50 to 95 million years, that is, they were formed when the Earth was experiencing the end of the Cretaceous era and the extinction of the dinosaurs, 66 million years ago. It is believed that Ptolemy observed it together with the cluster M7, but officially the discovery is attributed to Giovanni Battista Hodierna who counted 18 stars in 1654, Jean Philippe de Cheseaux rediscovered it in 1745, referring to it as "a very fine star cluster". Lacaille included it in his 1751-52 catalog as Lac III.12, and Charles Messier cataloged it as M6 in 1764. The stars in this cluster formed in the same molecular cloud and are still gravitationally bound to each other. It is located at a distance of about 1,600 light-years, occupying an area between 12 and 25 light-years and an apparent brightness of 4.2, making it easily observable with the naked eye or with simple instruments during the summer, towards the southeast of the celestial sphere. 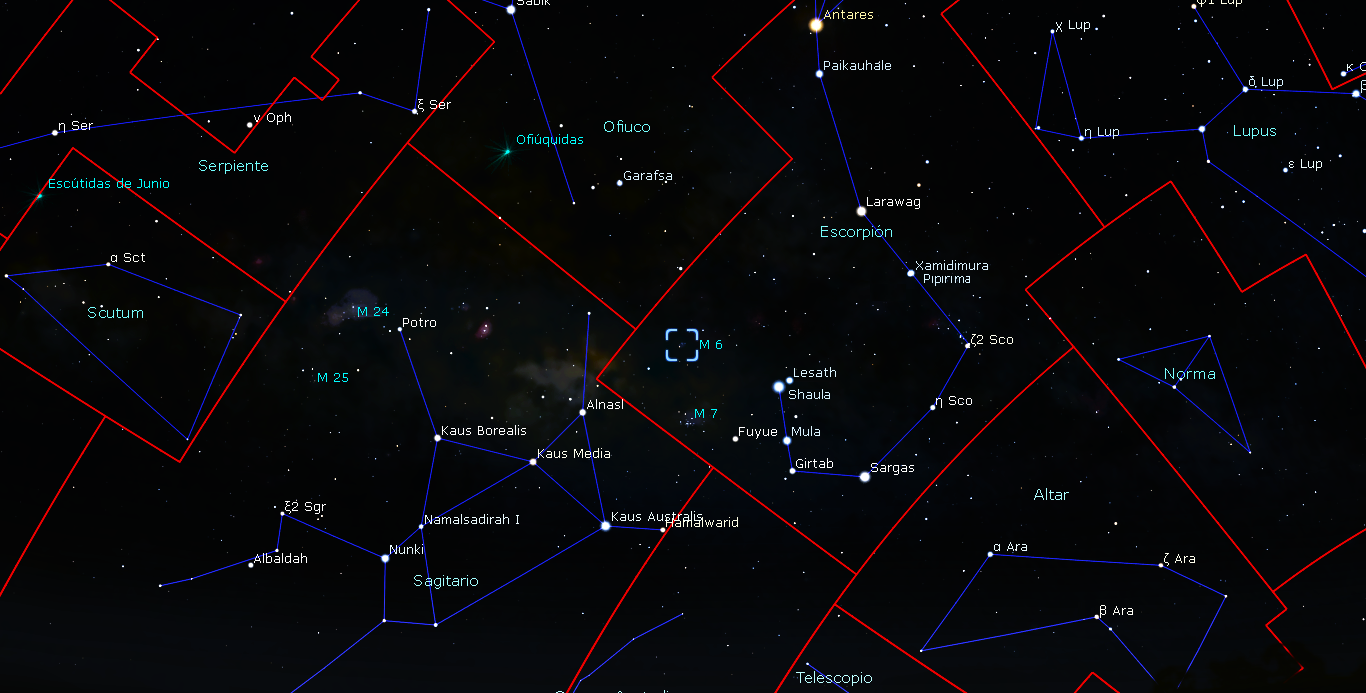 The open cluster M7 or NGC 6475, also known as the Ptolemy Cluster, was initially identified by Klaudios Ptolemy around the year 130 AD, detailing it in his work Almagest as "a nebulous cluster after the sting of the Scorpion".

Later, Edmund Halley also included it in his own catalog (1678), and other "hunters" of celestial bodies managed to rediscover it, such as Hodierna who listed 30 stars and Lacaille who also included it in his catalog. In 1764, Charles Messier added it to his list with number 7. It is estimated to be 220 million years old, made up of approximately 100 stars and is 800 light years from Earth. With an apparent magnitude m = 3.3 this cluster can be seen with the naked eye in dark skies, but it is always better to use binoculars or a telescope. M7 will already be well positioned for viewing most of the night, to the southeast of the celestial sphere. 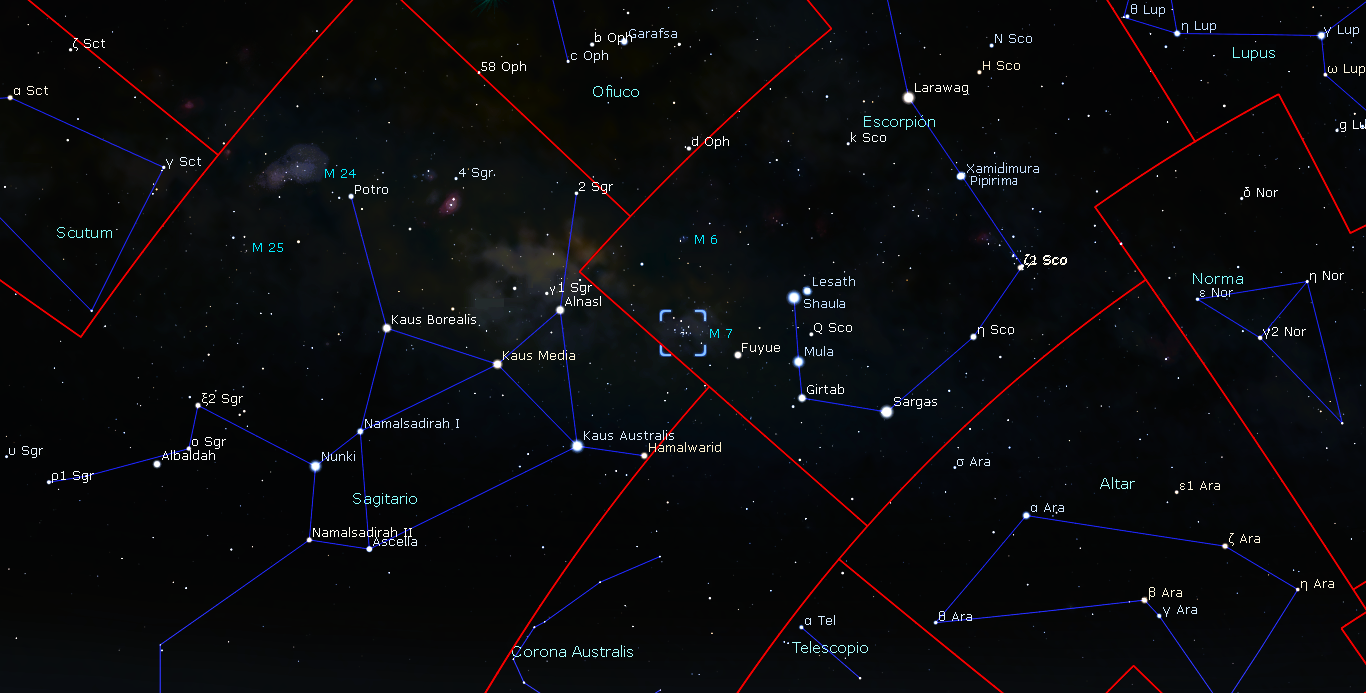 With the June Bootid shower, the summer meteor shower season begins. The Bootids will be active between June 22 and July 2, with their maximum on June 27. The maximum observable rate will be variable, between 0 and 100 meteors per hour. The radiant is in the direction of the Bootes constellation, with coordinates AR=14h57m, DEC=+47º57´. The main body responsible for the shower has been identified as Comet 7P/Pons-Winnecke. The best time will be after sunset on the 27th, towards the northeast part of the celestial sphere. 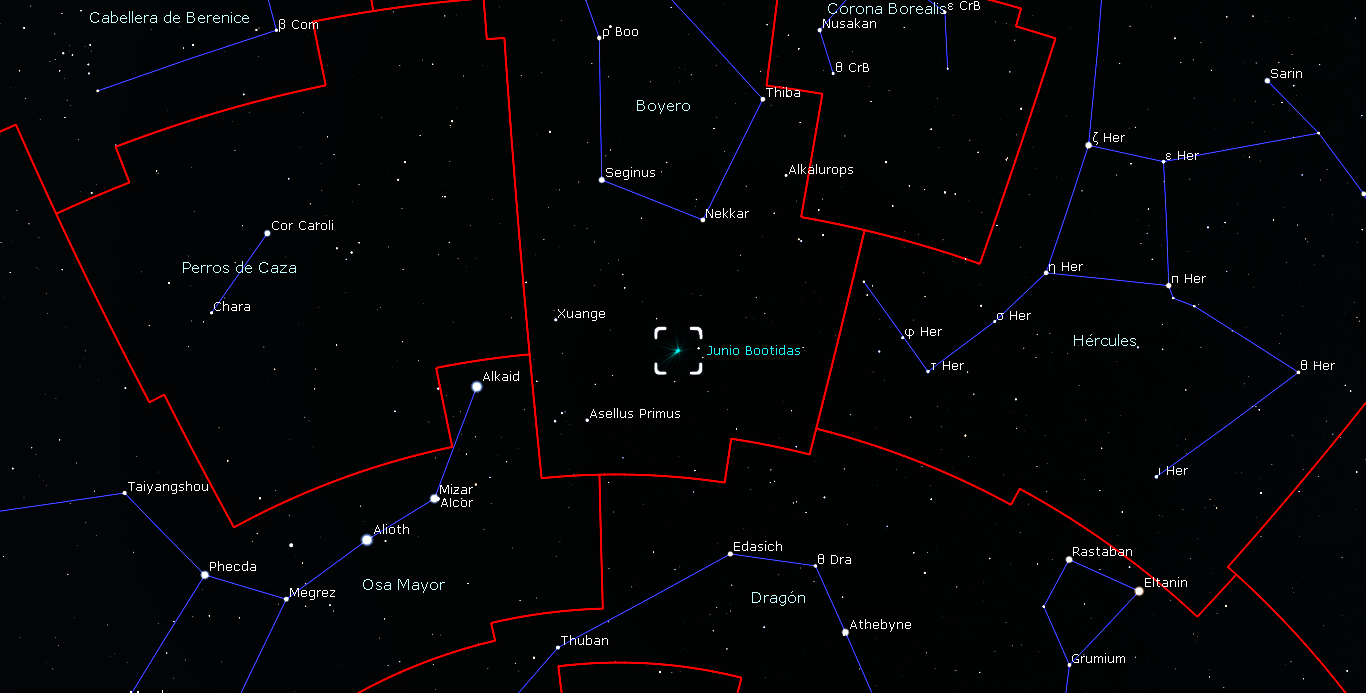 Watch the video in https://youtu.be/8P0MyhALHPs