Santa María Tonantzintla, Puebla, August 26th, 2022. The Seminar and School of Learning and Computational Intelligence (SENAIC) has been an initiative that emerged in the Coordination of Computational Sciences of the National Institute of Astrophysics, Optics and Electronics (INAOE) with the objective of sharing the most recent advances in computational intelligence and learning, and establishing collaborative links for cutting-edge research and technological development projects. Its tenth edition will be held from September 26 to 30 next.

For the third consecutive year, the SENAIC format will be virtual. The event is organized by the INAOE in collaboration with the Applied Computational Intelligence Thematic Network, the Technological Institute of Culiacán (Technological Institute of Mexico), the Tec de Monterrey Campus Estado de México and Monterrey, CENIDET, the Universidad Michoacana de San Nicolas de Hidalgo and the Veracruzana University.

During the days of activities of the Seminar and the School, tutorials, presentations, master conferences, and meetings between researchers from the different fields that converge on their theme are held. A hallmark of these events is that both the tutorials and the conferences are given only by the best experts in each field. In this way, it seeks to disseminate the most current lines of research in the area at the national level among undergraduate and postgraduate students and within both forums the interaction of specialists from the different areas in order to generate new research collaborations. 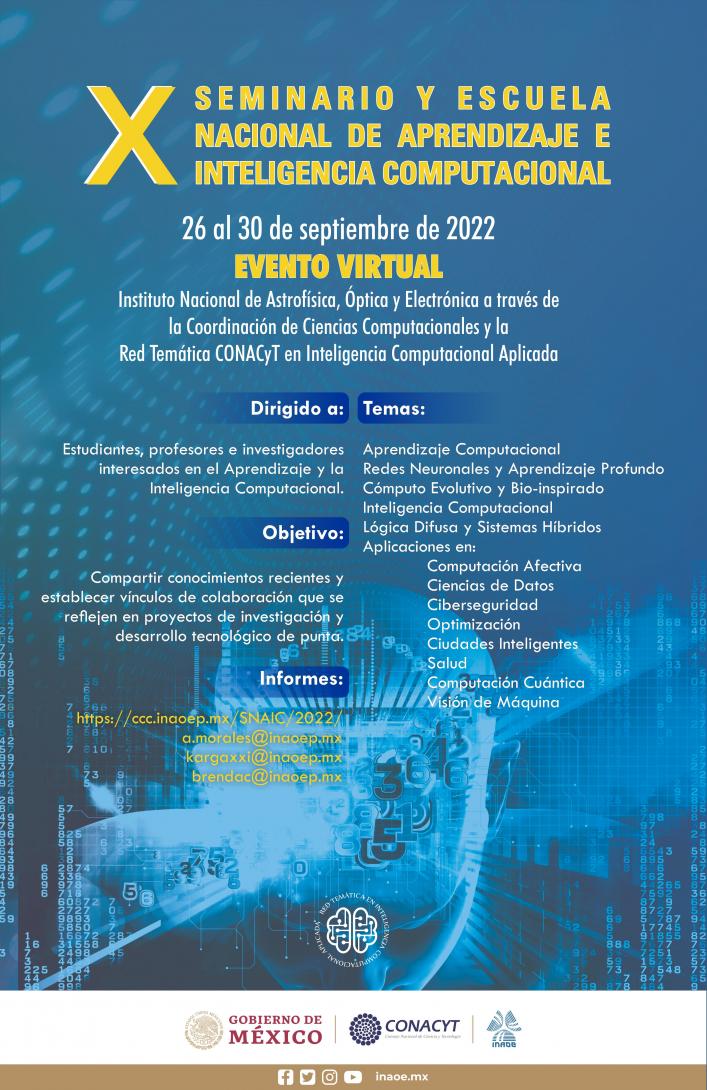 Dr. Alicia Morales Reyes, INAOE researcher and one of the organizers of the X SENAIC, informs that during the days of activities of the Seminar and the School, tutorials, plenary and master conferences are held, as well as a dialogue table. "In this way, it seeks to spread lines of research that are being worked on at the national level among undergraduate and graduate students and promote the interaction of specialists in order to generate new research collaborations", she abounds.

She adds that one of SENAIC's efforts is to locate women scientists who work on different topics related to Computational Learning and Intelligence. For example, “in the sixth version of the Seminar, a remote conference was held with Dr. Emma Hart from Napier University in Edinburgh, who is a renowned scientist in the area of ​​Evolutionary Computing, and is currently Editor-in-Chief of the Journal Evolutionary Computation from MIT. In the 2020 edition of both events, four internationally recognized researchers were invited seeking to have an important gender perspective through the keynote lectures given by doctors, Lucía Barrón (TNM-IT Culiacán, Mexico), Anna Esposito (Universita degli Studi della Campania, Italy), Marta Molinas (NTNU, Norway) and Una-May O'Reilly (CSAI Lab, MIT, USA). This allows us to approach young female students and transmit the message of the possibility of developing at the highest level of knowledge in areas of Learning and Computational Intelligence that today define the present and future in endless contexts that concern everyone and everyone. everybody”.

In each edition of both events, the active participation of students from multiple institutions has been achieved, mainly at the undergraduate level and those postgraduate students who carry out their training and research activities in the areas of learning and computational intelligence.

For his part, Dr. Carlos Alberto Reyes, a researcher at INAOE and another of the organizers, comments: “today, the different areas of study included in Artificial Intelligence, specifically those of Learning and Computational Intelligence, have a great impact on the different areas of knowledge societies, both in academic and research development, and in their impact on the productive areas of public and private initiative. In this sense, bringing the main lines of research and application closer to young undergraduate and postgraduate students is a priority activity that pursues the realization of the tenth edition of SENAIC”.

To conclude the activities of the Seminar, a discussion forum will be held with leading researchers and from the government, productive and business sectors within the theme of Learning and Computational Intelligence to analyze the present and future of the lines of research and technological development that concern us.

For more information, you can consult the page https://ccc.inaoep.mx/SNAIC/2022/index.html