Astronomical events of the month of September

This month you will notice that in some regions the forests turn reddish and the leaves of the trees begin to fall, autumn has arrived, here we will tell you when. We will also tell you an extraordinary story of tragedies and successes, the story of Rosetta and Philae. In addition, we will inform you of the last meteor showers of the summer, the conjunction of the Moon and Saturn, and we propose that the challenge of the month be to find Neptune and a planetary nebula. At the end of the month we will have a spectacular view of the gas giant Jupiter, but, of course, before we will go through the phases of the Moon.

Autumn has come
The autumnal equinox indicates the transition from summer to autumn, and as the origin of its name indicates (from the Latin aequinoctium - aequus nocte), it is the date when day and night have almost the same duration, that is, 12 hours. This year, in the northern hemisphere, the autumn equinox occurs on September 23 at 01:03 a.m. in Universal Time, that is, on September 22 at 8:03 p.m. in central Mexico; meanwhile, for the southern hemisphere it will be the beginning of spring.

The fantastic adventure of the Rosetta and Philae probe
The obelisk found on the small Philae island in the Nile riverbed was essential for Jean-François Champoillion to decipher the triple inscription (in hieroglyphics, demotic and Greek) on the Rosetta Stone and in this way the ancient inscriptions could be interpreted egyptian

The vital importance of these facts inspired astrophysicists to create a space probe that could help study and interpret the origin of comets, asteroids and the solar system. The Rosetta space probe, including its Philae lander, was conceived in 1993 and launched on March 2, 2004 toward comet 67P/Churyumov-Gerasimenko. On June 8, 2011, it entered hibernation mode, losing all communication with Earth, waking up on January 20, 2014, starting the reactivation mode and checking instruments. After more than 10 years of flight, on August 6, the probe enters the comet's orbit, making some adjustments, and on September 10, it begins collecting data to generate the comet's cartography. For November 12 of the same year, the crucial maneuver of the mission is carried out, the descent of the Philae module to the surface of the comet; unfortunately the lander was not able to anchor and after a few bounces it lost communication; On June 15, 2015, Philae shows a sign of activity, although it failed to recover, and on November 15 it is finally disconnected. The enormous loss of Philae did not prevent Rosetta from continuing its scientific work with great success, until September 30, 2016, when the scheduled descent of the mothership begins, to crash and disconnect. Today the remains of Rosetta and Philae travel together on the comet, through the dark universe. 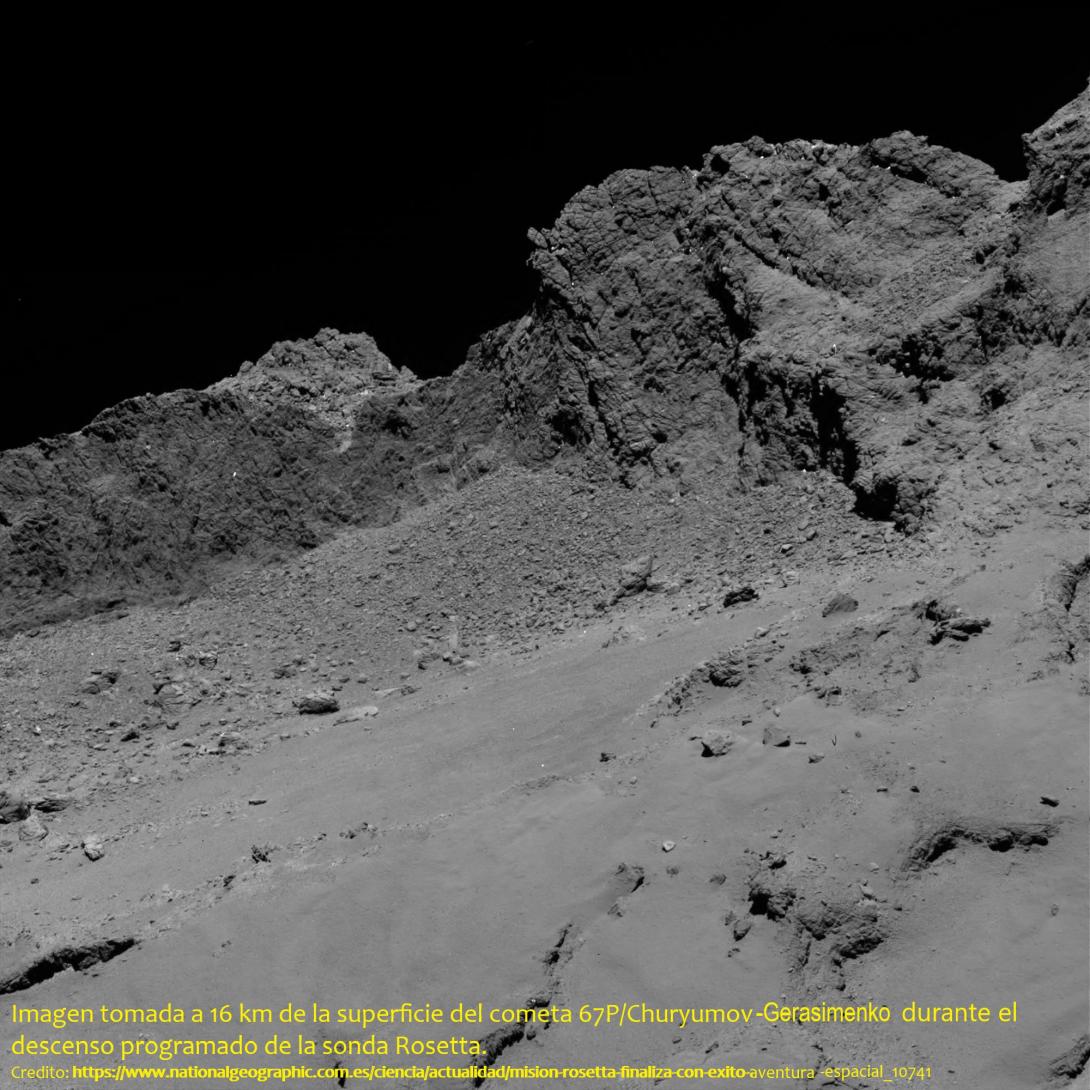 The last rains of summer

α Aurigids
The α Aurígidas meteor shower will be active between August 28 and September 5, with its maximum on September 1. The maximum observable rate will be six meteors per hour. Comet C/1911 N1 (Kiess) has been identified as the object responsible for this shower. The best moment will be shortly before dawn on September 1, in the direction of the constellation of Auriga (the Coachman), towards the northeast part of the celestial sphere. 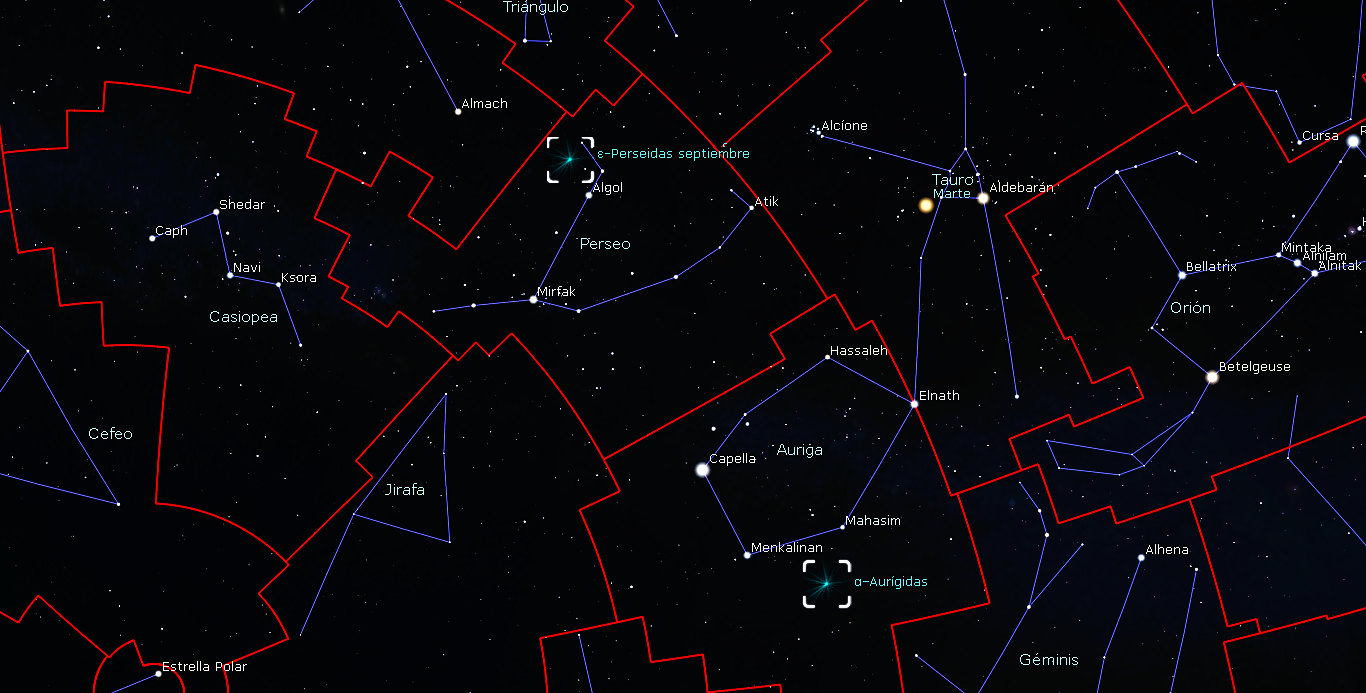 ε Perseids
Do not confuse the Perseid meteor shower with this discreet meteor shower, which will be active between September 5 and 21, with a maximum on September 9. The maximum observable rate will be five meteors per hour. The radiant is in the direction of the Perseus constellation, towards the northeast part of the celestial sphere, being the best time for its observation the early morning of September 9. The object responsible for the rain has not been fully identified.
Remember that no optical instrument is needed to visualize these rains, all that is required is to identify the regions, keep an eye out, be well dressed, a café, a place with minimal light pollution and clear skies. 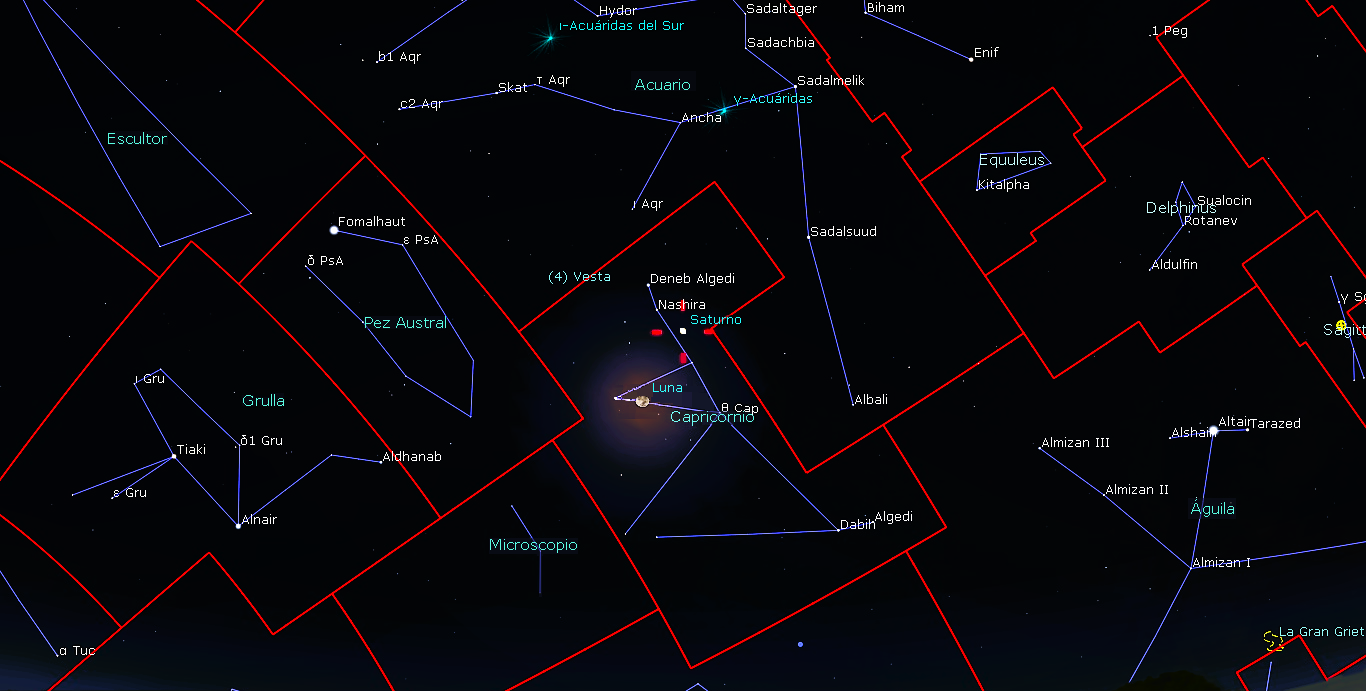 Selene visits the Lord of the Rings
The Moon will be sharing her Right Ascension (one of her coordinates in the sky) with the planet Saturn, we know this as a Moon-Saturn conjunction. On this occasion, our natural satellite will be passing at 3° 56' south of the Lord of the Rings, and both can be seen together in the direction of the constellation of Capricorn. If you want to marvel at the splendid view of Saturn's rings, binoculars or a small telescope will suffice. 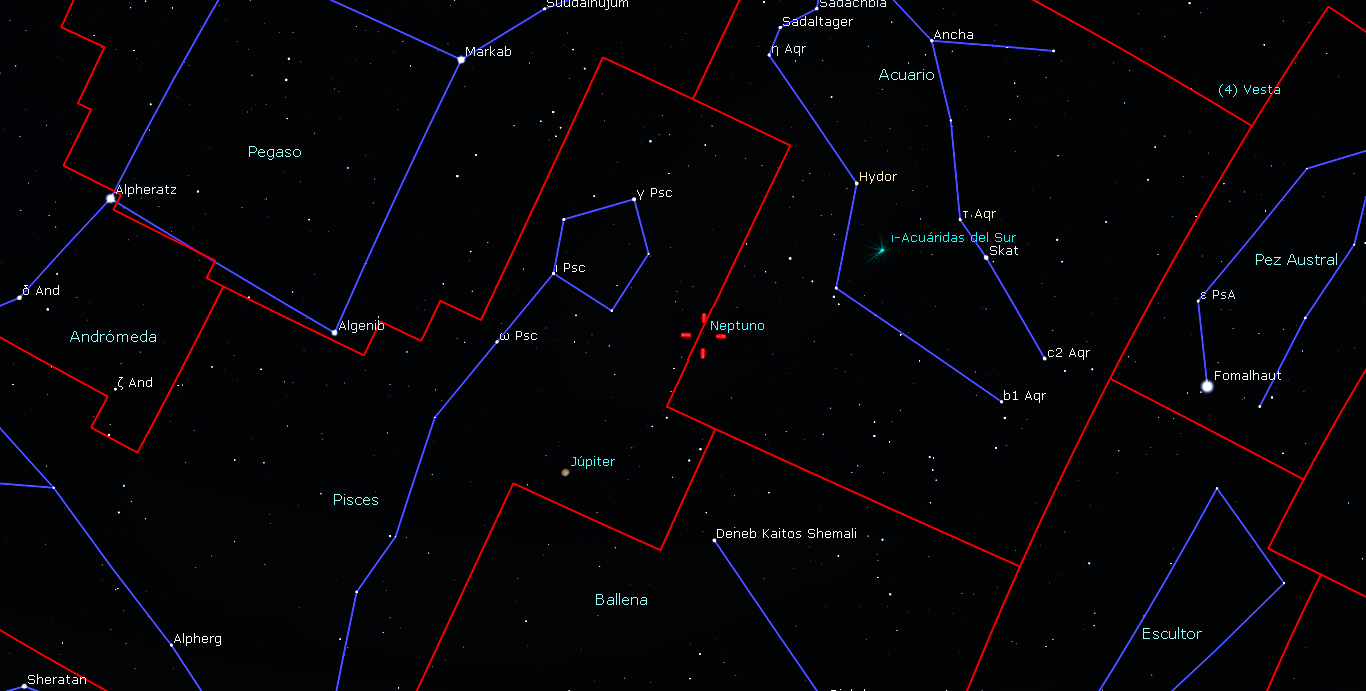 A giant dressed in blue
In 1846, Johann Gottfried Galle and Heinrich Louis d'Arrest found Neptune, with only one degree difference from the theoretical place given by Urbain Jean Joseph Leverrier. Neptune is observationally very attractive due to the blue tone of its atmosphere, which is composed mostly of hydrogen, helium and methane, the latter being the one that gives it that color. In September, Neptune will be in opposition, that is, aligned with the Earth and both on the same side of the Sun; at the same time it will be in perigee, that is, in its minimum separation from Earth, being located at a distance of 28.91 astronomical units. At the time of opposition, on September 16 at 5:12 p.m. Central Mexico time, it will reach a maximum magnitude of 7.8, so it will be visible with binoculars or a small telescope, in the direction of the Aquarius constellation. 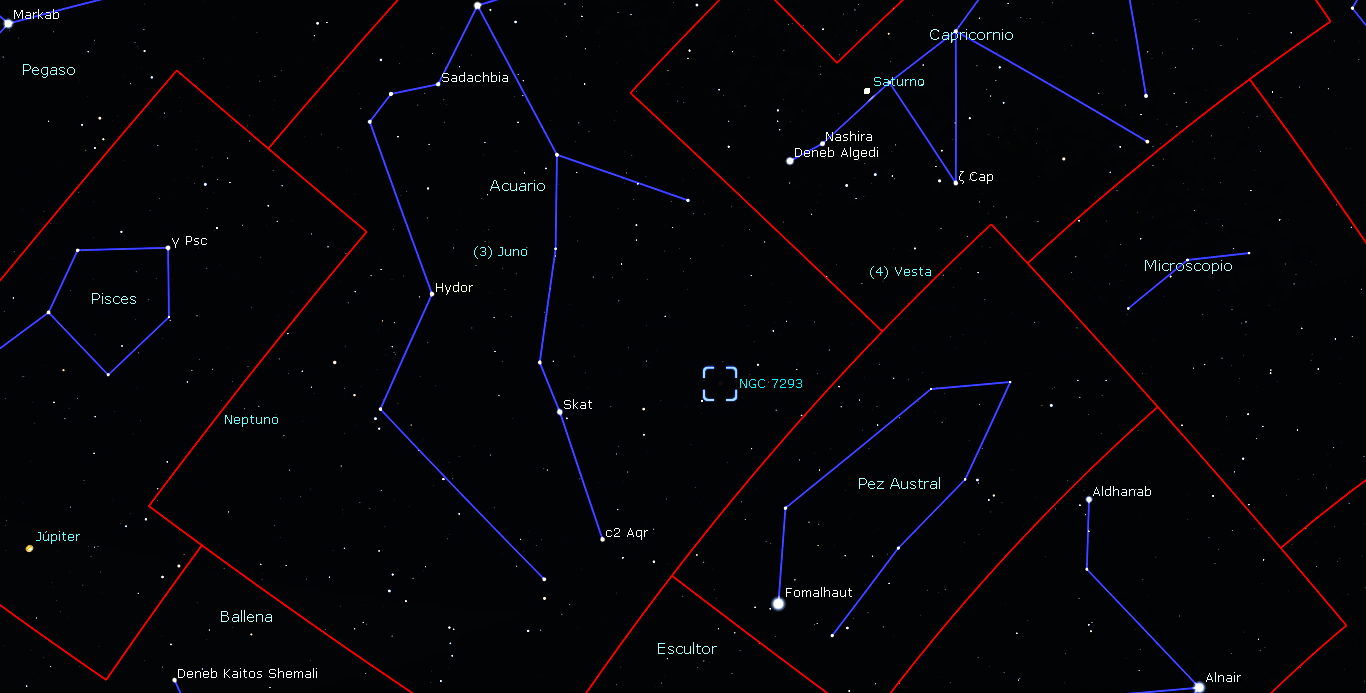 The eye of god
The planetary nebula NGC 7293 (Helix Nebula), in the constellation Aquarius, was discovered by Karl Ludwig Harding in 1824 and is located about 680 light-years from Earth, making it one of the closest planetary nebulae to us, with a radius of 2.87 light years. The nebula "The Eye of God" will be well located for observation most of the night, with a magnitude of 7.6 it can be searched towards the southeastern part of the celestial sphere. You will need binoculars or a small telescope to locate it, a clear sky and little light pollution. Good luck! 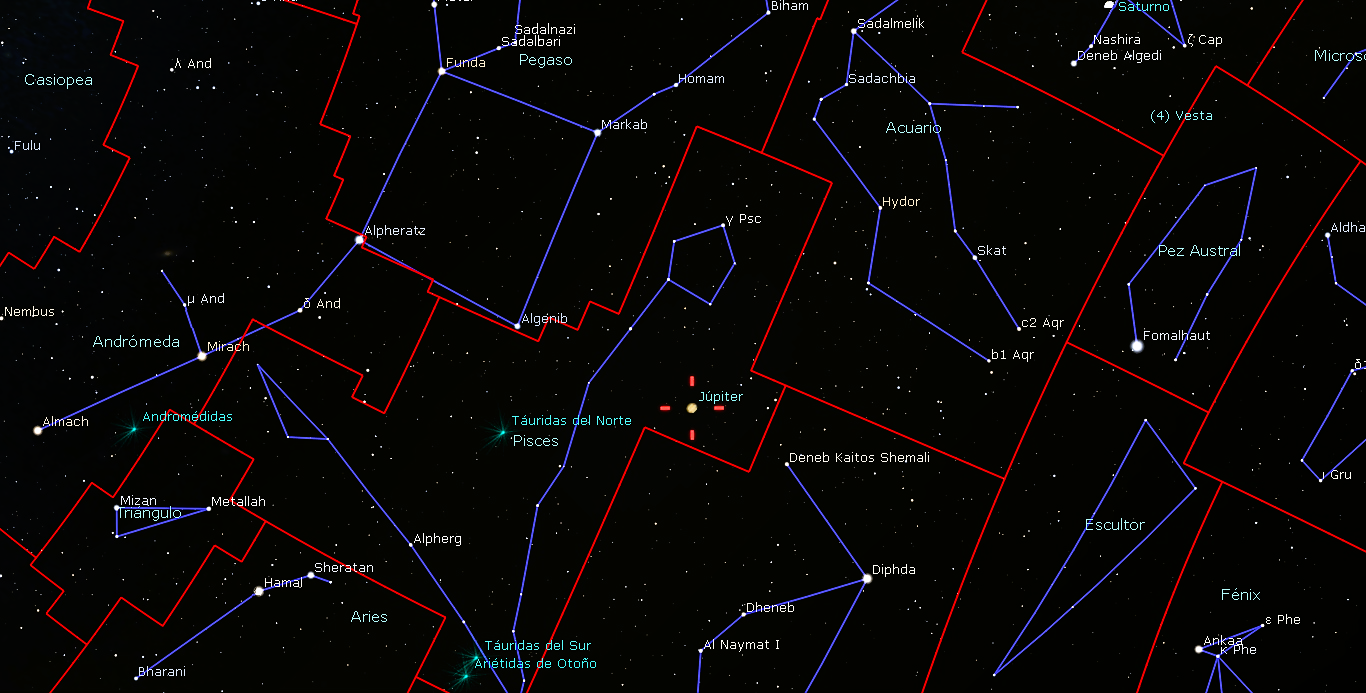 The eldest of the family
The largest planet in the solar system, Jupiter, will be in opposition, that is, it will be aligned with the Earth and both on the same side of the Sun; at the same time it will be in perigee, that is to say, in its minimum separation with the Earth; located at a distance of 3.95 astronomical units. At the time of opposition (September 26 at 2:25 p.m. Central Mexico) it will reach a maximum magnitude of -2.9, so it will be visible to the naked eye most of the night in the direction of the Pisces constellation ; but if you want to go a little further and observe the so-called "Galilean moons", you will need binoculars or a small telescope. From the early hours of September 26 we will see a "close approach" between the moons Io and Europa, and if you are even more daring, observing throughout the night you will notice that at dawn on the 27th another moon, Ganymede, is going to “approach” the fourth Galilean moon, Europa.