Astronomical events of the month of February 2022

During the second month of 2022 we will still have clear skies, which will give us the opportunity to observe the approach of some of the brightest planets, a meteor shower, some objects from the famous Messier Catalog and a multiple star system, while the challenge of the month will be observing an asteroid. Of course, you can not miss the Moon going through its different phases.

A favorite pair of galaxies

The galaxy M81, along with its neighbor M82, were discovered in 1774 by Johann Elert Bode, who described them as a "nebulous spot". Pierre Méchain independently discovered them as nebulous spots in 1779, and Charles Messier included them in his catalog in 1781. M81 has a perfect spiral structure, with a bright yellowish bulge and long bluish arms. Together with M82 they form the "gravitational system M81". Separated about 150 thousand light years, both are located 12 million light years from Earth. The Bode galaxy, as M81 is also known, due to its magnitude of 6.9, is one of the easiest galaxies to observe and is a favorite of amateur astronomers; it is possible to find it with binoculars or with small telescopes in the direction of the constellation of the Big Dipper, towards the northeast part of the celestial sphere. 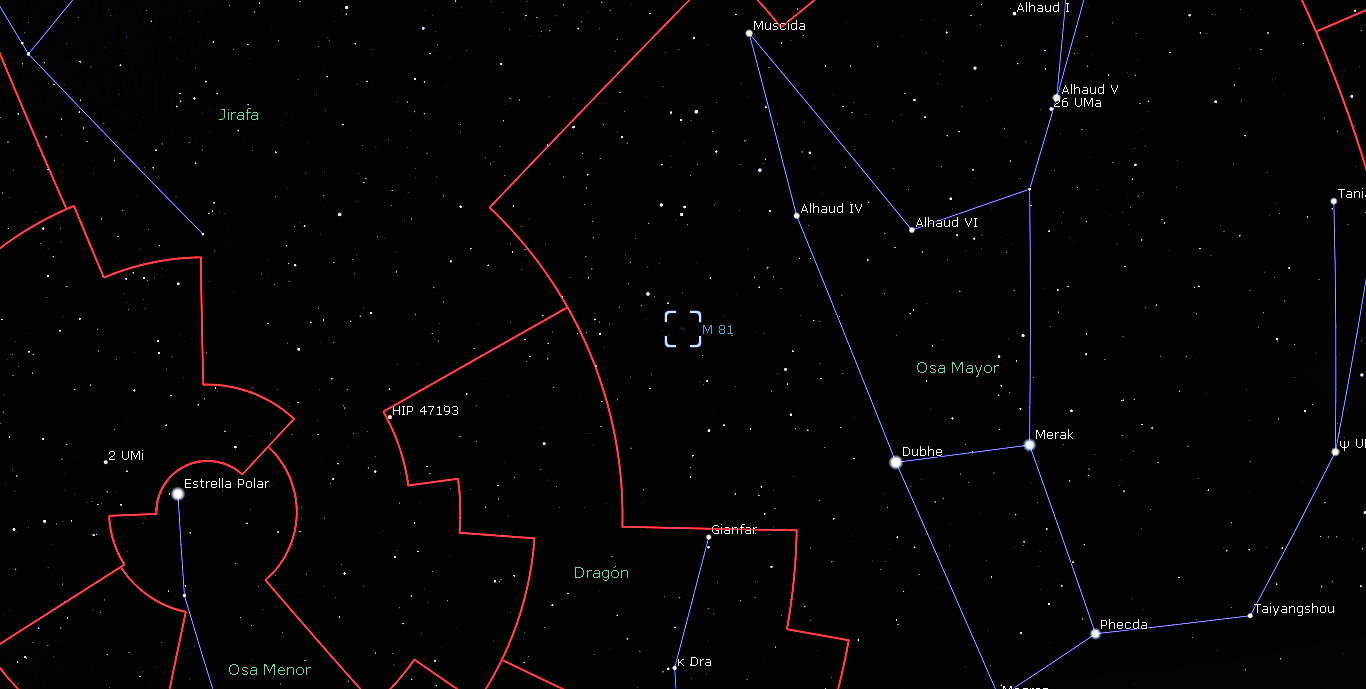 The challenge: from Marseille to the world

20 Massalia belongs to the Main Asteroid Belt, located between Mars and Jupiter. The asteroid was discovered by Annibale De Gasparis on September 19, 1852 and independently, one night later, by Jean Chacornac, who announced the discovery. Massalia is the Greek name for Marseille, the French city from where the object was observed. Massalia has a diameter of 145.5 km and takes 1,366 days to complete one orbit around the Sun. Asteroid 20 Massalia will be in opposition on February 5 at 14:22 UT, it will pass at 1,112 A.U. from us, in the direction of the constellation of Cancer, reaching a maximum brightness of magnitude 8.5, so a moderate aperture telescope and good weather conditions will be needed to observe it, it will be visible most of the night, towards the northeastern part of the celestial sphere. 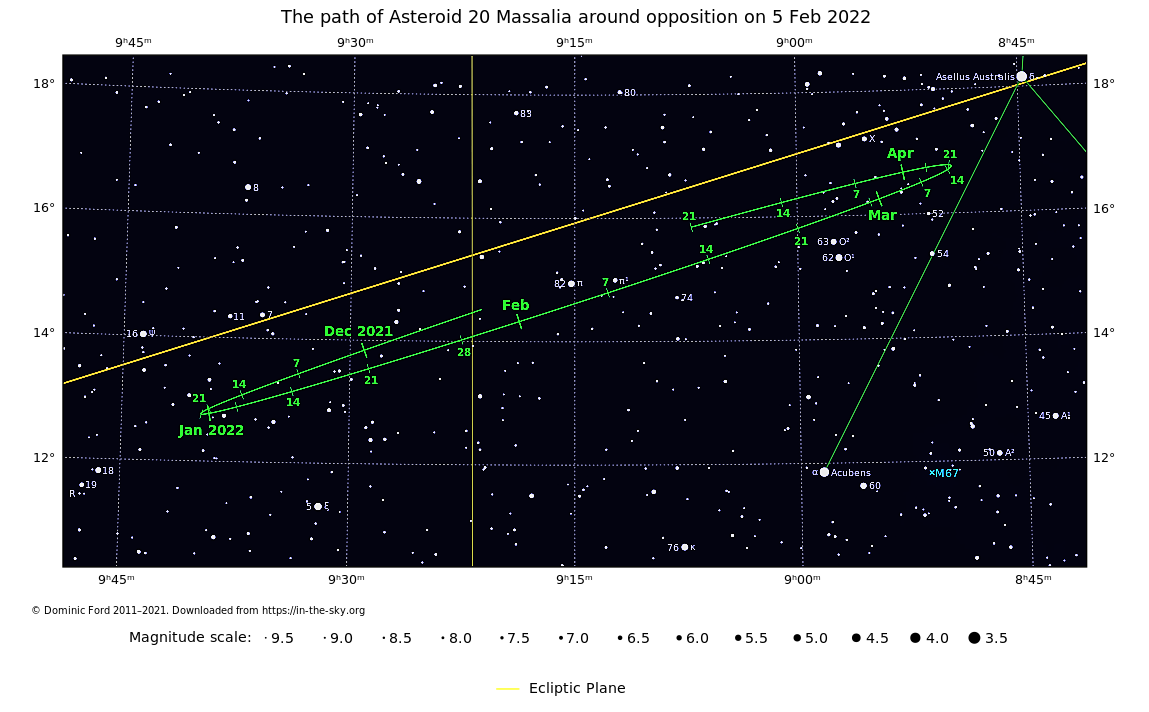 A southern shower, the alpha-Centaurids

The alpha-Centaurid meteor shower will be active between January 28 and February 21, with its maximum on February 8. The maximum observable rate is variable, with at least 6 meteors per hour. The radiant is in the direction of the Centaurus constellation, with coordinates AR=14h01m, DEC=-59º05´. The object responsible for the rain has not been fully identified. The best moment will be at dawn on the 8th, towards the southern part of the celestial sphere. It is expected to perceive some fleeting ones as long as the southern horizon is dark and free of obstacles. We will not need any auxiliary optical instrument, so we just have to look up at the sky. 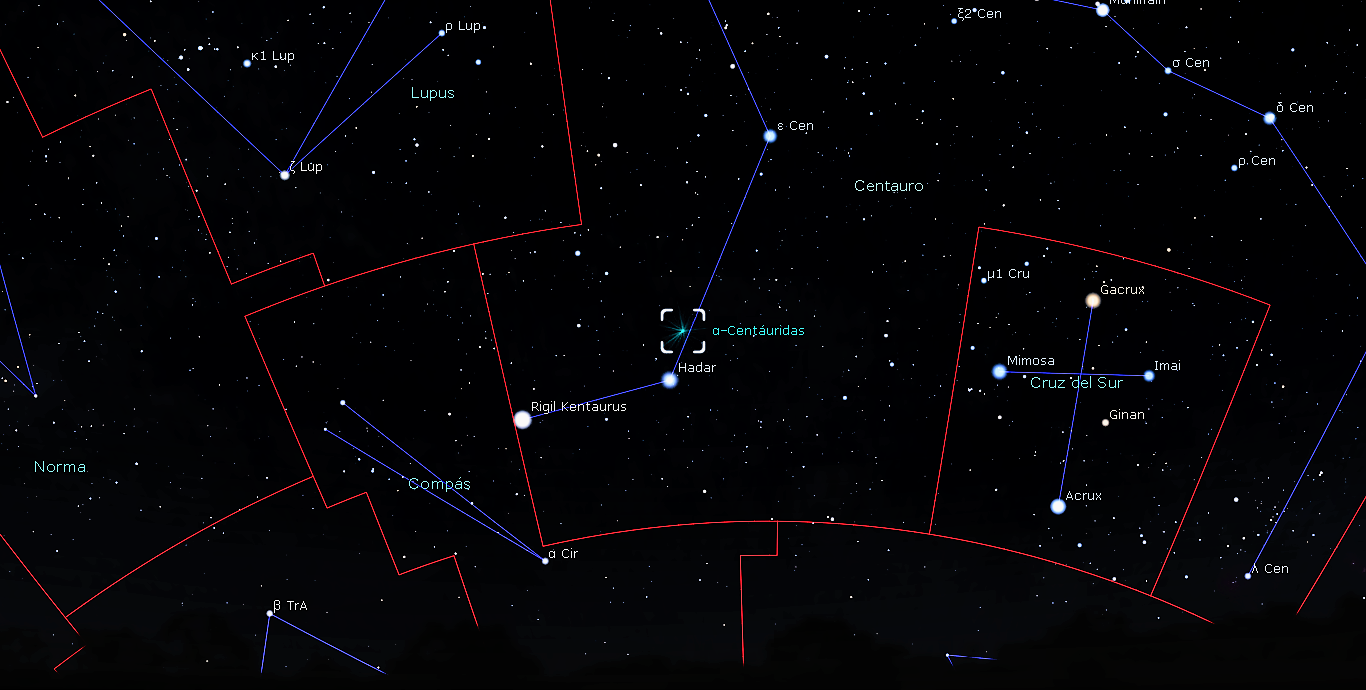 Venus, Mars and Mercury say good morning to you

During the early hours of February 13, we will have a wonderful planetary image worthy of a contest. The planets Venus and Mars will be in conjunction, that is, both planets will be sharing one of their equatorial coordinates, the so-called right ascension. At that time, the brightest planet in the sky, Venus, will be 6° 34' north of the red planet. To complete the picture, we will have the planet Mercury a little further east, very close to reaching its maximum height in its morning appearance. The three celestial bodies will be located in the direction of the Sagittarius constellation. 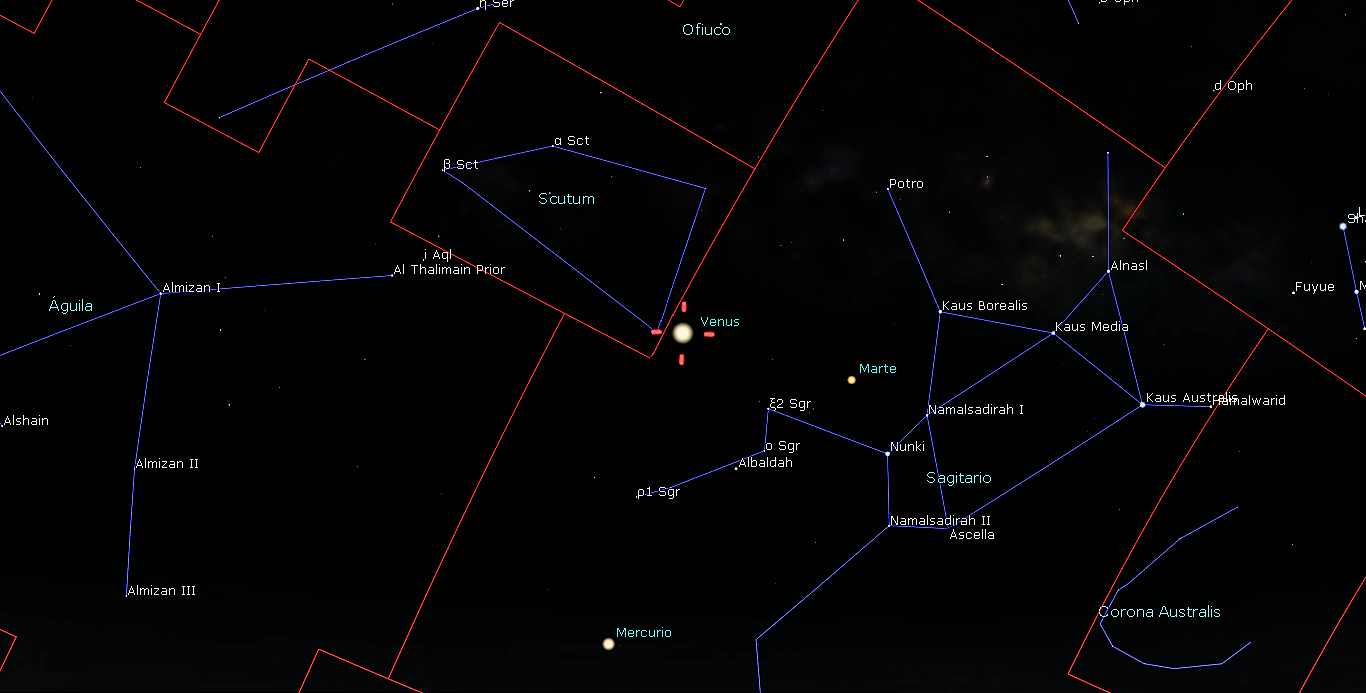 A spiral galaxy with the densest core of matter ever found

The giant spiral galaxy M106 is one of the objects discovered by Pierre Méchain around 1781 and rediscovered by William Herschel in 1788. Objects M105, M106 and M107 were added to the Messier Catalog in 1947 by astronomer Helen Sawyer Hogg.

The galaxy M106 has a diameter of 135 thousand light years, and about 400 billion stars; It is located 23.68 million years from Earth and shines with a magnitude of 8.4. M106 is classified as a Seyfert-type galaxy, with high activity and strong X-ray emission, due to a central supermassive black hole, with an estimated mass of 36 million solar masses, concentrated in a small volume, which makes it the object with the highest density of matter ever found. The galaxy M106 will already be well located for observation most of the night, in the direction of the constellation of The Hunting Dogs, towards the northeast part of the celestial sphere. To observe it requires binoculars or a telescope with a moderate aperture and, of course, clear and dark skies. 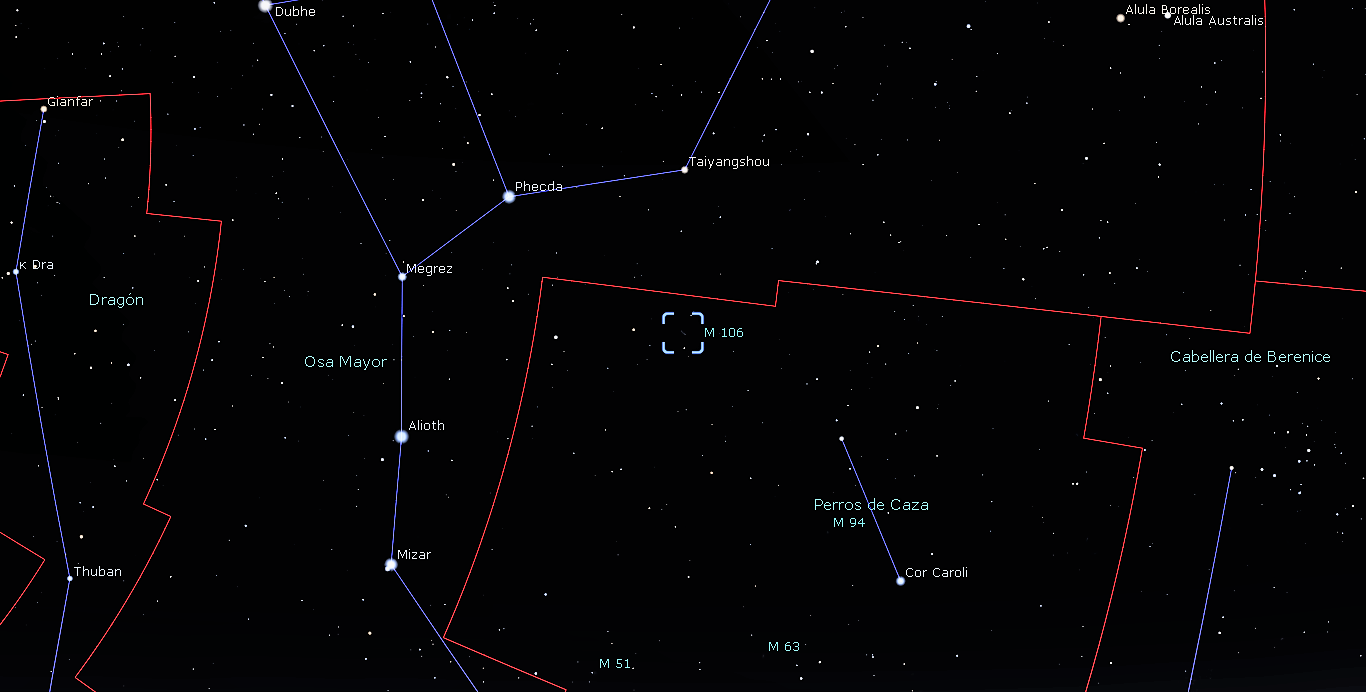 The stars Mizar and Alcor, located in the constellation Ursa Major and separated by 11 minutes and 48 arc seconds in the sky, dominate a multiple system. Mizar has a visual magnitude of 2.2 and is 78.1 light-years from us, while Alcor is located 81.1 light-years away and shines at magnitude 3.9. The first notes on Mizar as a double system date from 1616, by Benedetto Castelli, although it was formally discovered by Giovanni Battista in 1650. By 1889, the astronomer Edward Charles Pickering discovered that the star Mizar has, in turn, a companion that he named Mizar B, and more recently, in 2009, Project 1640 astronomers observed a faint companion to Alcor that they named Alcor B, in addition to other possible members, thus constituting this multiple system. The Mizar and Alcor system is highly recommended for inexperienced observers, as it is easy to locate with the naked eye, but it is always better to use binoculars or a small telescope to distinguish both components. 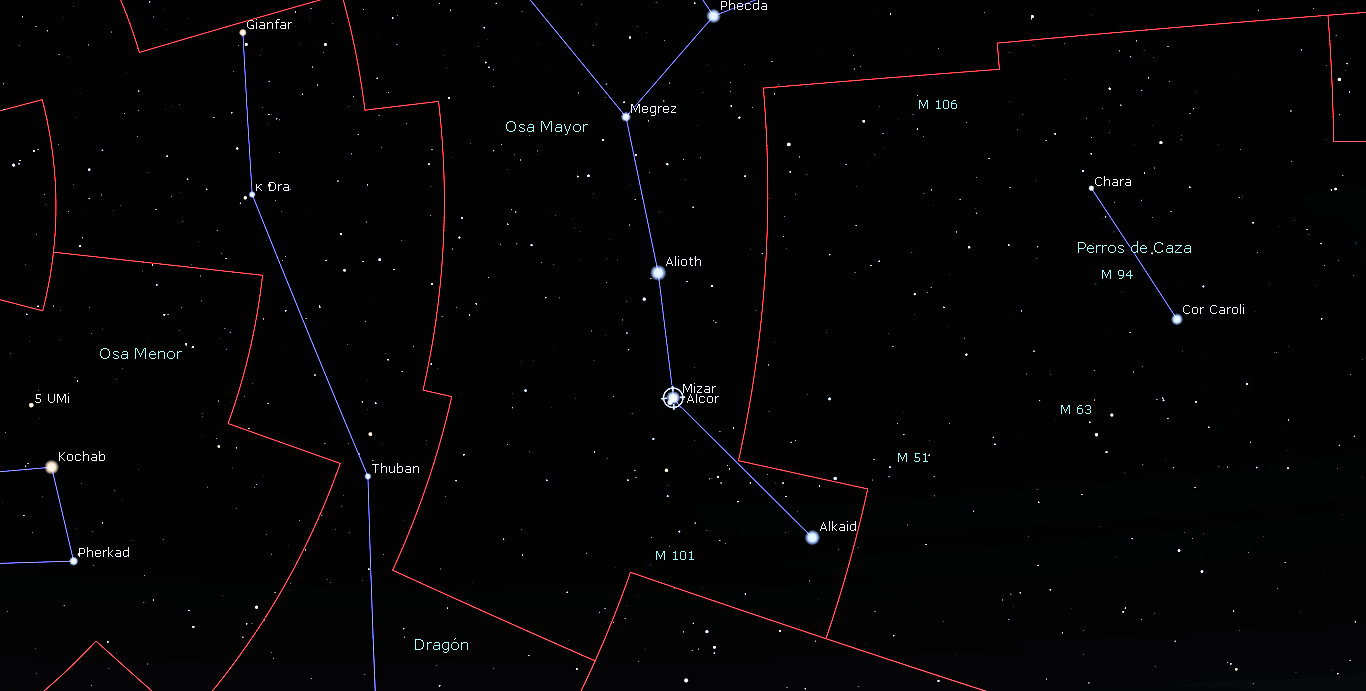